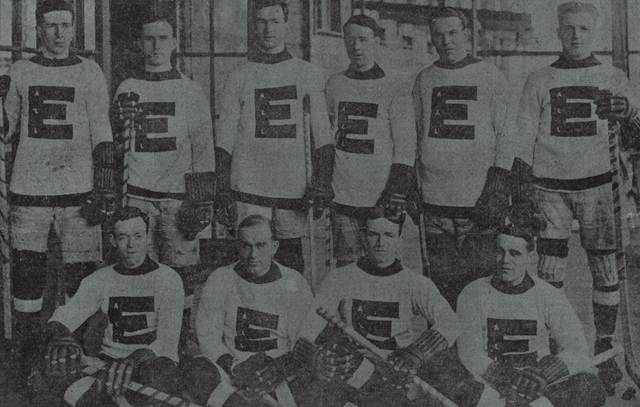 Lester Patrick wanted an East-West All Star Game in 1912, and contacted the one man in the East who could probably make it happen: Art Ross, the on-ice leader of the Montreal Wanderers.

Ross was the unofficial leader and spokesman for professional players in the East.

Ross and Patrick had played shinny as boys in the old days, in Montreal, and they had butted heads and sticks in many a game since, including major league and Stanley Cup contests.

The Western All-Stars had Hugh Lehman in goal, with Frank Patrick at point and Ernie “Moose” Johnson cover, Newsy Lalonde rover, with Tommy Dunderdale at centre and Harry Hyland and Ran McDonald on the wings. Lester Patrick and Jimmy Gardiner were the spares.

The number of Stanley Cups won by members of the teams was 9 for the East and 7 for the West.

The rules were to be western, including teams of seven men on the ice, and the Western Allstars had home ice advantage. They practiced at the Vancouver Arena for ten days straight, in order to meld as a team, while the Eastern Allstars had only about five days practice together.

The single big advantage the Western Allstars had was the artificial ice. For the uninitiated it was always strange to play on, as it made passing faster and crisper, and a player had to skate faster just to keep up with the puck.

The Western Allstars mastery of the ice, and goal scoring was too powerful for Ross' All-Stars and won the first game, 10-4, in Vancouver with Dunderdale punching home four goals.

The final game, back in Vancouver, was played under the Eastern style six men a side rules. Both teams took more chances, with spectacular individual rushes. The Eastern players were determined to show their best stuff, and won the game 6-5.

The series had been a success as the players earned extra money and the fans saw new faces.