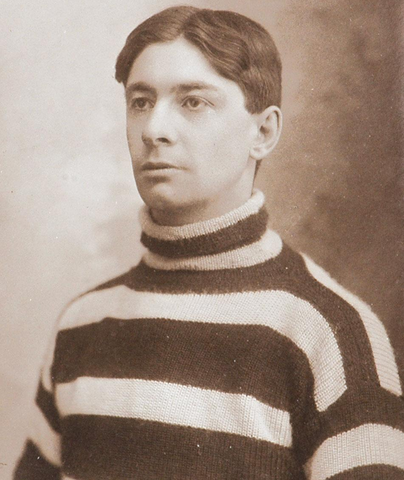 Harry "Rat" Westwick (April 23, 1876 in Ottawa, Ontario - April 3, 1957) was a Canadian Amateur Ice Hockey player - Born in Ottawa, Canada, Westwick played hockey for Ottawa teams, joining the intermediate Ottawa Aberdeens of the Amateur Hockey Association of Canada (AHAC) in 1893. He moved up to the senior-level Ottawa Hockey Club the next season. At the time, Ottawa had lost its goaltender Albert Morel and Westwick played several games as goaltender before moving up to rover on the advice of a coach who saw his fast skating ability. During the summer, Westwick would play for the Ottawa Capitals in lacrosse. The Capitals, ostensibly an amateur team, were discovered to be paying players in 1896 and Westwick was suspended from ice hockey play. Westwick would deny receiving any money and he was reinstated by Ottawa in 1898, only to be suspended again in 1898 by the Canadian Amateur Athletic Union. In 1899, Westwick moved out of town to find work in Waterloo, Ontario but returned to Ottawa in time to play some games for the Capitals ice hockey team, by then playing in Ontario Hockey Association - In 1900–01, Westwick returned to the Ottawa Hockey Club, and he played for the club until 1908, and was a member of the four-time Stanley Cup winning squad later dubbed the Silver Seven for receiving silver nuggets for their 1903 Stanley Cup win. Westwick's best season was in 1905, when he scored 15 goals in eight regular season games, and 5 goals in the Dawson City challenge series. In 1906–07, his brother Tom joined the Ottawa squad, starting one game. By 1909, Westwick's skating ability had been reduced by a series of ankle injuries and he did not make the 1909 Ottawa squad. He played the season for the Ottawa Senators of the Federal League, a professional team which had several former Silver Seven players. It was his last season.

On one occasion, after ice hockey had become professional in 1906, Westwick played for a team other than Ottawa. He joined the Stanley Cup champion Kenora Thistles in 1907 after the Ottawa's 1907 season was complete. He played the final games of the Thistles' season and played in the Thistles defense of its Stanley Cup win against the Montreal Wanderers, at the time, the arch-rival of Ottawa. While the Thistles defended their Cup win in Manitoba play with Westwick, his appearance with the Thistles caused the challenge series with the Wanderers to be protested by the Wanderers and a cancellation was threatened by the Stanley Cup trustees. The series, held in Winnipeg, was beyond the reach of the trustees, and went ahead. The Wanderers won the series, making the protest moot. The following year, the trustees implemented the January 1 rule, where only players on a team as of January 1 of the season were eligible for Stanley Cup play - After retiring from active play, Westwick remained involved in hockey, becoming a referee in the National Hockey Association / NHA - His nickname 'Rat' was from a Quebec City journalist, who in 1896 called Westwick a "miserable, insignificant rat". Westwick's scrappiness led opponents to resort to aggressive (and somewhat violent) tactics in order to derail his tenacious playing style - Harry Westwick was inducted into the Hockey Hall of Fame in 1963