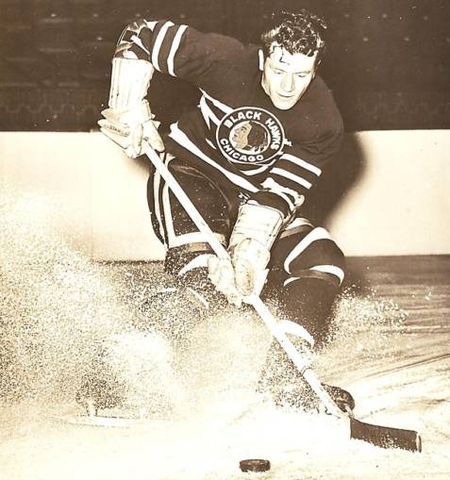 He played in the National Hockey League (NHL) for the Chicago Black Hawks and New York Rangers and is best known for his part in originating Hockey's Hat Trick tradition - Kaleta, a fleet winger, joined the Blackhawks for the 1941-42 season, then missed three full years during World War II, but spent the three seasons playing with the Calgary A-16 Currie Army during the War.

As Taft fondly recalls, the Toronto press ran with the story. On the radio that night, when he listened for Hockey results, the big news was “Blackhawk Alex Kaleta’s hat trick.” The next day’s newspapers were all over it too. Although there are other versions about how one of the most famous terms in Hockey — and the lexicon of all sports — evolved, the tale of Taft and Kaleta is officially recognized by the Hockey Hall of Fame. Kaleta went on to complete the season that year with an NHL career-high 46 points.

After four seasons with the Black Hawks, Kaleta joined the New York Rangers in 1948–49. He recorded consecutive 31-point seasons in two seasons with the Rangers before ending his NHL career by joining the Saskatoon Quakers of the minor pro Pacific Coast Hockey League (PCHL) in 1951–52. The next season, the PCHL was absorbed by the Western Hockey League (WHL), where Kaleta played with the Quakers for three more seasons before retiring in 1954–55.