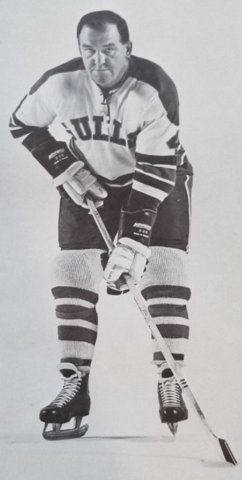 Evans joined the Lethbridge Maple Leafs for the 1948-49 season, and played three games with the Rangers during the season. He also played in two games the following season. It was not until the 1950-51 season that Evans had the opportunity to suit up for 49 games for the Rangers, scoring his 1st NHL goal on March 17, 1951 vs Al Rollins of the Toronto Maple Leafs. He also played for the AHL Cincinnati Mohawks during the season.

In June, 1958, he was claimed by the Chicago Black Hawks in the Intra-League Draft, where he would play in a similar role for his final four NHL seasons in Chicago, being teamed with Dollard St. Laurent on the second pairing. Evans was a member of the 1961 Stanley Cup championship team, where Chicago ended the Montreal Canadiens of five consecutive championships when Evans knocked Jean Béliveau out of action with a clean, but bone-crunching hit.

In 1974, Evans was hired to coach the Salt Lake Golden Eagles of the Central Hockey League / CHL. After one season that included coach of the year honors (Jake Milford Trophy) and winning the Adams Cup as league champions, he was promoted to the parent club NHL California Golden Seals. He coached the anemic franchise in its final year in the Bay Area and its two seasons as the Cleveland Barons before the financially troubled organization merged with the Minnesota North Stars in 1978.

Evans returned to the CHL Salt Lake Golden Eagles, winning the Adams Cup in 1980 and 1981 as CHL champions, and also being awarded the Jake Milford Trophy in 1979 and 1980 as CHL coach of the year.

He was then hired by the NHL Hartford Whalers in 1983. In his third season with the club, he earned a playoff berth, and in 1987, he led the club to a division title. A poor performance the following year resulted in Evans being fired midseason.