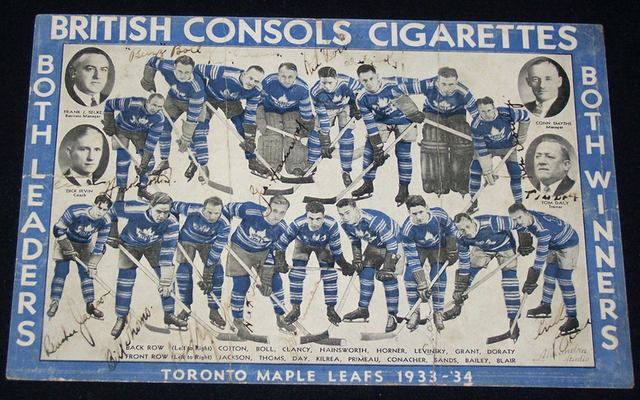 The mystery of which company produced the “anonymous” 1933-34 V129 hockey card set is now solved. On the back of this autographed photo, there is the clear and definitive statement, “By special arrangement, an autographed photograph of any Maple Leaf, Canadien or Maroon 1933-34 Hockey Player will be mailed for one complete deck of British Consols Card Pictures. Name your Player and mail card pictures to: British Consols Premium Department 97 Richmond Street West – Toronto”

Every single 1933-34 hockey set has been accounted for including Hamilton Gum, Canadian Gum, O-Pee-Chee, World Wide (Canadian Goudey), and CCM. The only series where the manufacturer has remained unknown and unproven until now is the set which Jefferson Burdick labeled V129 in the American Card Catalog. Furthermore, from this 50 card set, #39 Harry Oliver was released on a very limited basis and there is currently only one which is known in the hobby.

In order to thwart winners in the British Consols Cigarettes autographed hockey photograph contest, #39 Harry Oliver was produced in quantities which made completion of the set all but impossible -- many consumers ended up with only 49 different cards and likely a lot of duplicates which resulted from the futile search for the elusive #39 Harry Oliver. It is conceivable that the British Consols Cigarettes salesman used this exact 1933-34 Toronto Maples Leafs signed photograph to demonstrate the autographed premium contest as well as to entice additional businesses and stores to carry tobacco products from British Consols.

There is also a Montreal Canadiens and Montreal Maroons team photograph with identical advertising. It is important to remember that to date, this is the only signed premium photograph which can be directly tied to British Consols Cigarettes autographed premium contest as well as the 1933-34 V129 hockey cards set. This item is very historically important and is likely one-of-a-kind.