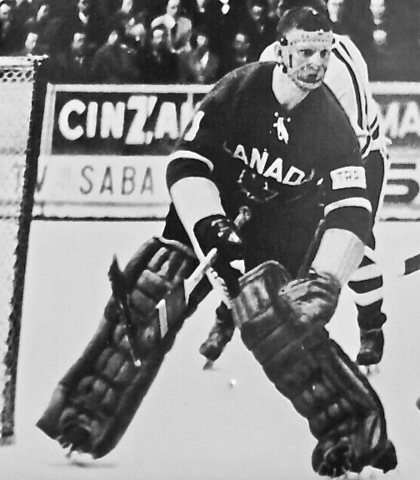 Martin played minor Hockey in his hometown of Rossland before joining the Junior A Lethbridge Native Sons in the Western Canada Junior Hockey League / WCJHL in 1949.

Martin would play in the B.C. Kootenays for many seasons, mostly with the Smoke Eaters, but also playing for the Rossland Warriors, Kimberley Dynamiters, Nelson Maple Leafs and Spokane Warriors. He was named the league’s top goalkeeper nine times.

Martin had several offers to play in the NHL but none bettered the security he had with his job at Cominco in Trail. However in 1967 at age 34 after fifteen years as one of the world’s best amateurs, Martin accepted an offer from the NHL’s St. Louis Blues for whom he shared duties with the great Glenn Hall. In thirty games Martin recorded a 2.59 goals average and 1 shutout on Christmas Day, 1967 vs the Minnesota North Stars. He also played in 2 playoff games (the year the Blues reached the Stanley Cup final). Martin came to a tough decision after the season. It would be 210 games to get to an NHL pension. He’d already been a firefighter at the Cominco plant in Trail and had 12 years invested into that pension plan. He went back to Trail and served another 24 years.

Martin had become a player/coach with the Rossland Warriors during the 1965-66 season, and later became a head coach of the Trail Smoke Eaters (1968) and the Spokane Jets, leading them to the 1972 Allan Cup championship.

Martin had made his own face mask, along with several others, sending 2 of them to Czechoslovakia and 1 to the Soviet Union (Russia). He was known as the 1st goalie in international play to wear a goalie mask. When he played in St. Louis for that 1 NHL season, Glenn Hall, whom he shared the goaltending duties with, asked him to make a mask for him, which Martin did in the St. Louis Blues’ arena’s maintenance shop.

Vladislav Tretiak, the great Russian goalie wrote in his autobiography “I had also found a hero in Hockey, a Canadian goaltender named Seth Martin,”

Seth Martin was inducted into the BC Hockey Hall of Fame in 1998.