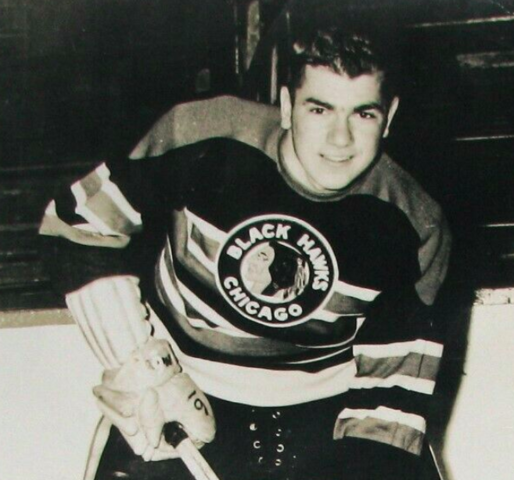 Prystai then skipped a year of junior eligibility and turned pro with the Chicago Black Hawks for the 1947-48 season, scoring 7 goals and 11 assists in his NHL rookie year.

Prystai had a good next season for the Black Hawks, and then in the 1949-50 season, he was placed with Bep Guidolin and Bert Olmstead, a former Moose Jaw teammate who, incidentally, hailed from the hamlet of Sceptre, Sask. The trio was known as the "Boilermakers Line", a nod to their blue-collar style of hard work paired with physical toughness. Prystai had his best season as a pro - points wise, when he scored 29 goals and 22 assists.

In a surprising move, Prystai was then traded to the Detroit Red Wings with Jim Henry, Gaye Stewart and Bob Goldham for Al Dewsbury, Harry Lumley, Jack Stewart, Don Morrison and Pete Babando, July 13, 1950. The blockbuster deal was the largest in NHL history to that time.

“I was disappointed because it looked like the Hawks were an up-and-coming organization,” Prystai told the Globe and Mail’s Paul Patton in 1987, “but Detroit had so many good players that, after a while, I was happier then heck.”

Prystai scored 20 goals, 17 assists in his first season with Detroit, and also played in his first NHL All Star game on October 8, 1950, scoring a goal and 2 assists.

Prystai filled several different roles in his years with Detroit, mostly playing right wing, but slotted in to fill on any line. “They used me as a swing man because I could play all three forward positions,” the left-handed shot said. He was paired with Lindsay and Howe, on a checking line with Marty Pavelich and Tony Leswick, and later with youngsters Alex Delvecchio and Johnny Wilson.

Prystai had another strong season in 1951-52, scoring 21 goals, 22 assists, but in the 1952 NHL playoffs, Prystai really stepped up his game, having 4 assists in the series vs the defending champion Toronto Maple Leafs, as the Red Wings eliminated them in 4 straight games, and then playing a solid checking roll vs the Montreal Canadiens in the championship final. Prystai also scored the 1952 Stanley Cup championship goal in game 4 on April 15 on home ice at the Olympia Stadium in Detroit. He also had another goal and a assist, and the uncontested star of the final game was a 5-foot-8 forward known as Marvelous Metro to the fans and Meatball to his teammates.

Prystai had another solid season for 1952-53, but the Red Wings would be eliminated in the semi-finals of the 1953 playoffs. Prystai played in the 1953 NHL All-Star Game.

Scoring slipped for Prystai in the 1953-54 season, and he was used more as a checker and role player. but in the 1954 Stanley Cup finals, Prystai assisted on game winning goals on April 8 (game 3) and April 10 (game 4), along with scoring in game 3 and game 6, as the Red Wings would win the 1954 Stanley Cup championship in 7 games on home ice - in overtime. Prystai also played in the 1954 NHL All-Star Game.

After playing in 12 games for Detroit at the start of the 1954-55 season, Prystai was traded to the Chicago Black Hawks for Lorne Davis, November 9, 1954. Prystai’s fellow Red Wings were reported to be “angered and hurt” by what they regarded as a “shotgun trade.” That the owners of the successful Red Wings franchise and the sad-sack Black Hawks franchise were related only served to further tensions between players and management.

“Prystai was handed to the Chicagoans in a surprise manoeuvre which even caught general manager Jack Adams by surprise. Adams, who built up Red Wings for 28 years and authored all previous trades, was told of this one only after it had been completed.

“Prystai was shipped away as Marguerite and Bruce Norris, sister and brother owners of the Detroit club, rushed to the aid of the Chicago team, owned by James D. Norris, a brother.”

Interesting, is that Prystai was traded back to Detroit after playing just 8 games for Chicago at the start of the 1955-56 season, and he helped Detroit reach the 1956 Stanley Cup finals, scoring 1 goal, 2 assists during the playoffs.

Prystai played in Detroit until early in the 1957-58 season when he was sent down to the minor league Edmonton Flyers to recover from a broken leg. In Edmonton, he broke the same leg after crashing into a goal post. After spending the summer in a cast, he returned to the Flyers only to break the same leg for a third time when bodychecked by defenceman Don McLeod of the Victoria Cougars only four games into the season. He spent his 31st birthday in Royal Jubilee Hospital in Victoria.

After retiring as a player, Prystai coached the Omaha Knights for a half-season, a short stint which included a bizarre incident. Immediately after losing a game against the St. Paul Saints by 7-1, the Knights were ordered to play an overtime period to settle a disputed game from earlier in the season. Prystai refused to allow the Knights to take the ice, so St. Paul’s Howie Hughes took the face-off uncontested before skating down the ice to score on an empty net. Prystai was suspended by the president of the International Hockey League. The team fired him days later. The Knights were in last place with an 8-28 record. Prystai was replaced as coach by general manager Mud Bruneteau.

Prystai then went back to his roots in Saskatchewan, to manage and coach the Moose Jaw Canucks from 1960 to 1963, and then coach the Melville Millionaires for 2 seasons from 1963 to 1965.

Metro Prystai was inducted into the Saskatchewan Sports Hall of Fame in 1989.

Metro Prystai was inducted into the Saskatchewan Hockey Hall of Fame in 2012.