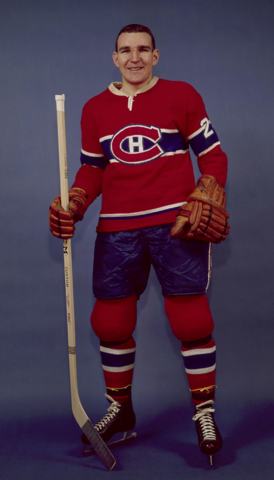 Ferguson vowed to be "the meanest, rottenest, most miserable cuss ever to play in the NHL."

Ferguson's Hockey career began as a stickboy for the Vancouver Canucks, then of the Western Hockey League. He became interested in the role of enforcer when he saw the more talented Canucks players get hit repeatedly, without having their team-mates attempt to respond or dissuade their opponents.

Ferguson played his junior Hockey in Western Canada, with the Melville Millionaires of the Saskatchewan Junior Hockey League in 1956–57, and 1958–59. In 1959–60, he was playing professionally with the Fort Wayne Komets of the International Hockey League. In 1960, he moved to the American Hockey League and the Cleveland Barons.

In 1963–64, he was promoted to the Canadiens as an "enforcer" to protect captain Jean Beliveau from aggressive defenders.

The Canadiens had recruited the fierce forward because they felt the team lacked toughness, and John Ferguson delivered in spades, as merely twelve seconds into his first NHL game, he was in a fight with Ted Green of the Boston Bruins; Ferguson won the fight.

Ferguson served notice that there was a new cop on the beat. No longer would opponents be permitted to take liberties with the Montreal Canadiens’ star players. John Bowie Ferguson quickly became the most feared man in the league, retaining the distinction until his retirement eight years later.

“Fergy” had but one mission on the ice: to help carry the Canadiens to victory. A lot of men have claimed that they would go through a wall for their team. In John Ferguson’s case, it was no exaggeration. Strong, skilled, canny, fearless and mean, Ferguson neither expected nor gave any quarter.

Hockey was a war for Ferguson and he put every weapon at his disposal towards emerging victorious. With intensity and pugilistic ability reminiscent of Eddie Shore, Ferguson dropped his gloves and regularly administered punishment to those who stepped across the line in their dealings with his teammates. It was not unheard of for him to stage the occasional pre-emptive strike, erasing the line completely.

Hostilities extended well beyond the limits imposed by the game clock. He walked out of restaurants rather than breathe the same air as the enemy and crossed the street rather than cross paths with opponents. Other players were beginning to socialize, if only in the offseason, with men who wore different uniforms but Ferguson steadfastly refused to fraternize.

Ferguson was also a potential offensive threat. Playing on a line with Beliveau, Ferguson led all NHL rookies in scoring in his first season and finished as runner-up for Calder Trophy in 1963–64. The 5-foot-11, 190-pound left-winger also scored the Stanley Cup-winning goal in 1969, during a season that saw him score a career-high 29 goals with a plus-30 rating. In 85 post-season games, he scored 20 goals and added 18 assists. He also earned two selections to the NHL All-Star Game.

It was said that his unexpected retirement in 1971 caused problems for the Canadiens, who then started getting roughed up by other teams. Rumours persisted that General Manager Sam Pollock wanted to bring him out of retirement.

In 1972, he became the assistant coach to Harry Sinden of Team Canada who defeated the Soviet team in the Summit Series. Ferguson gained some notoriety because he asked Bobby Clarke to take out Soviet star Valeri Kharlamov with a slash to the latter's ankle. Ferguson later justified his orders saying "that guy is killing us."

In the years to follow, he became the head coach and later general manager of the New York Rangers. He stopped coaching in 1977, and was fired as general manager in 1978, at which time he became the General Manager of the Winnipeg Jets of the World Hockey Association and, starting in 1979, the National Hockey League. Ironically he had lured Anders Hedberg and Ulf Nilsson away from the Winnipeg Jets in 1978 to the New York Rangers. Both were considered to be the Jets' best players, and among the best in the WHA as a whole.

After a stint in the Ottawa Senators’ front office in the early 1990s, Ferguson moved on to a scouting role with the San Jose Sharks.