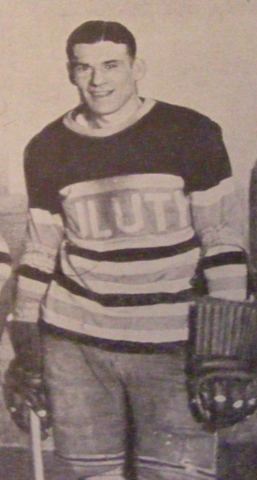 Morrison played his senior Hockey with the Selkirk Fishermen from 1913 to 1915, and then enlisted in August, 1915 with the Canadian Army for World War I duty, and served out his wartime commitment with the 11th Reserve Battalion

Before being sent overseas, Crutchy played one season for the Winnipeg 61st Overseas Battalion, helping the team win the 1916 Allan Cup championship.

After serving in the war, Morrison returned to competitive Hockey for the 1919-20 season with the Selkirk Fisherman. He then signed with the Winnipeg Falcons for the 1920-21 season, scoring 9 goals, 4 assists. Crutchy then returned to the Fisherman again to start the 1921-22 season, but after just 5 games played, where he scored 10 goals. was signed by the Edmonton Eskimos of the Western Canada Hockey League / WCHL on January 9, 1922.

The Eskimos would win the WCHL championship for the 1922-23 season, and would challenge for the Stanley Cup in late March, 1923 vs the Ottawa Senators. Edmonton lost the best-of-three series in two straight games, and Crutchy would score the only goal for the Eskimos in the series in game one, 2-1 overtime loss.

Morrison would play with the Eskimos until 1925, when he was traded to the New York Americans with Bullet Joe Simpson and Roy Rickey for $10,000, September 18, 1925. Crutchy would play in just 18 NHL games with the Americans with 0 points scored.

Morrison would then sign as a free agent with the Regina Capitals of the Prairie Hockey League, November 30, 1926, playing the 1926-27 season in Regina.

Morrison then Jumped to the American Hockey Association / AHA , playing with the Duluth Hornets (1927-29), St. Paul Saints (1929-30). He was transferred to the Buffalo Majors October 5, 1930, after St. Paul relocated, playing in Buffalo until he was released in early 1932, finishing his Hockey career back in Duluth for the final 16 games of the 1931-32 AHA season.

John "Crutchy" Morrison is a “Honoured Member” of the Manitoba Hockey Hall of Fame, inducted in 1999.