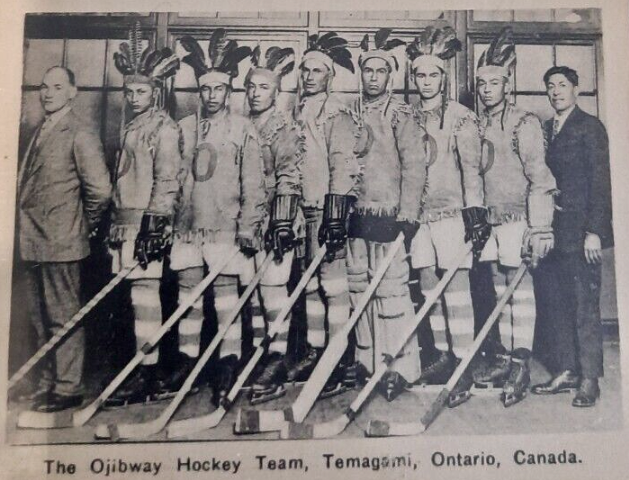 Sponsored by William Friday & Son's, the “Cree & Ojibway Indian Hockey Tour,” as it was billed on the side of their bus, featured the “Fast Ojibway Indians” versus the “Great Cree Indians.”

The Ojibway players were from Bear Island in Lake Temagami—now known as Teme-Augama Anishnabai or Temagami First Nation.

The Ojibway team was led by right-winger and defenceman Pishabo. Nineteen years old and 190 pounds, Pishabo was Chief William Pishabo of the Temagami First Nation son. He was joined in the forwards by brothers H. and R. Anderson, and Langevin. Brothers George and William Turner were defenceman and substitute respectively. The goalie was Petrant, scion of a large Metis family at Bear Island.

Instead of standard Hockey jerseys, each player wore a “feathered head-dress,” buckskin tunic emblazoned with an O, and “beaded waists” on the ice.