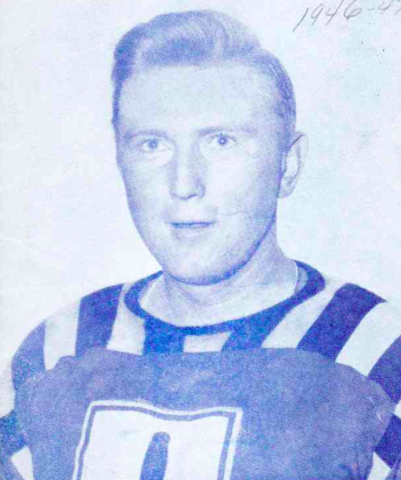 Slowinski played all his minor and junior Hockey in his hometown of Winnipeg, and played 2 seasons with the Winnipeg Monarchs, and selected to the 1942 Manitoba Junior Hockey League / MJHL First All-Star Team before joining the army at the end of the season.

Slowinski then played for the Ottawa Army Hockey team to start the 1942-43 season, but was quickly signed by the Ottawa Commandos for the rest of the season, helping them win the 1943 Allan Cup championship, scoring 4 goals, 2 assists in the playoffs.

Slowinski then played in the Alberta Senior Hockey League for the next 2 seasons with Red Deer Wheelers (1943-44), Calgary Navy (1944-45) finishing the season with the Winnipeg Navy for their 1945 playoffs.

The Ottawa Senators of the Quebec Senior Hockey League then signed Slowinski, where he played for the next 2 seasons under coach George "Buck" Boucher. Slowinski helped the Senators reach the league final both seasons, losing to the Montreal Royals.

Slowinski was then signed as a free agent by New York Rangers, October 7, 1947, and played in 42 NHL games, while also playing 18 games for the AHL New Haven Ramblers in the 1947-48 season.

Slowinski started the 1948-49 season with the Ramblers, but then jumped leagues to play for the St. Paul Saints in the United States Hockey League, helping the Saints win the 1949 United States championship.

Slowinski then returned to the New York Rangers, playing there for the next 4 seasons. In his first year back with the Rangers, Slowinski helped the Rangers to the 1950 Stanley Cup finals, scoring 2 goals, 6 assists in the playoffs, as the Rangers were defeated in 7 games by the Detroit Red Wings. As Stanley Cup runner-up, the Rangers would be awarded the O'Brien Cup, the last team to win the trophy, at one time the National Hockey Association championship trophy, which was retired after the season.

Slowinski then played for the AHL Buffalo Bisons from 1953 to 1956, helping the Bisons reach the Calder Cup finals in 1955.

Slowinski finished his Hockey career in the AHL, playing for the Springfield Indians (1956-57) and 3 games for the Providence Reds at the start of the 1957 season.

Edward Stanley "Eddie" Slowinski is a “Honoured Member” of the Manitoba Hockey Hall of Fame, enshrined in 1985.