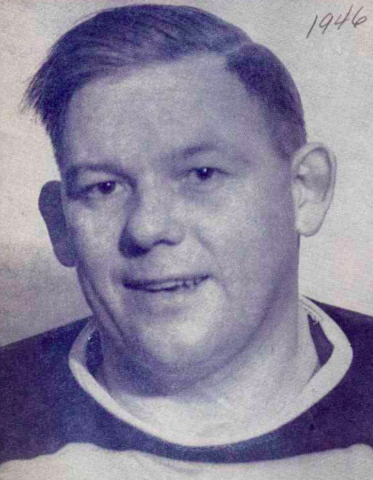 He earned the nickname ‘Bucko’ as a boy in Fergus. ‘Bucko’ is thought to be an Irish term for a fighter or one who is athletically inclined.

Prior to Hockey, McDonald was known for Canada’s “other” official national sport: Lacrosse. He was considered a bulldozer on the field who was surprisingly fast on his feet and known for his uncanny flow between ball and stick. Bucko went on to win the Mann Cup in 1931 with the Brampton Excelsiors, and over the years would continue to play, coach and referee box lacrosse. Forty years later, he would be inducted into the Canadian Lacrosse Hall of Fame in 1971 and to this day the Bucko McDonald Award is awarded annually to the leading scorer for Ontario Lacrosse Association / Major Series Lacrosse.

McDonald was then traded to the IHL's Detroit Olympics for Gamey Lederman and Lloyd Gross, January 9, 1935, and was called up for 15 games with the NHL's Detroit Red Wings late in the season.

McDonald was a regular player on the Red Wings the next season, playing in 47 games and 7 playoff games, helping the Red Wings win the 1936 Stanley Cup championship. Bucko scored a goal in game 1, 2 goals in game 2, as the Red Wings defeated the Toronto Maple Leafs 3 games to 1 for the championship. In the semi-finals, McDonald played in the longest NHL game ever, as the Red Wings and Montreal Maroons played 9 periods of Hockey before Mud Bruneteau finally ended the game at 16:30 of the sixth overtime period for Detroit.

McDonald played the next season again in Detroit, while maybe not as effective as his first year in Detroit, Bucko was still a big part of the Red Wings as they repeated their playoff run again, and were crowned 1937 Stanley Cup champions.

McDonald played another full season with the Red Wings, and started the following season in Detroit, but was traded to the Toronto Maple Leafs for Bill Thomson and $10,000, December 19, 1938.

McDonald played for the Maple Leafs until 1943, which included playing on the 1942 Stanley Cup championship team. Bucko also played 26 games for the Providence Reds during the 1940-41 and 1942-43 seasons.

After playing just 9 games for the Maple Leafs to start the 1943-44 season, McDonald was sold to the New York Rangers in November, 1943, and played 2 seasons in New York.

McDonald signed with the Hull Volants of the Quebec Senior Hockey League for the 1945-46 season, and the finished his Hockey career with the Sundridge Beavers from 1947 to 1949.

McDonald turned to coaching after his playing days, and coached the Sault Ste. Marie Greyhounds of the Sr. Ontario Hockey League in 1957, also coaching 1 season on the American Hockey League with the Rochester Americans during the 1958-59 season.

Although an all-star defenseman in his own right, many best remember Bucko McDonald as the man responsible for turning Bobby Orr into a defenseman. McDonald coached Orr in peewee and bantam Hockey. McDonald was the man who had Bobby play defense, despite his obvious offensive talents. When Orr's father Doug questioned McDonald about the curious move, Bucko responded, "Bobby was born to play defense." The rest, as they say, is history.

In 1945, Bucko McDonald was elected to the House of Commons of Canada in the Ontario riding of Parry Sound. A Liberal, he was re-elected in 1949 and 1953.