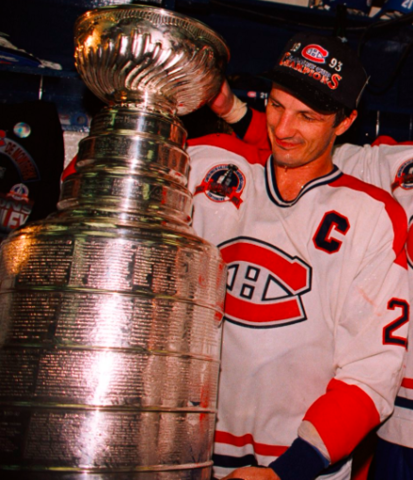 Carbonneau played his junior Hockey with the Quebec Major Junior Hockey League / QMJHL with the Chicoutimi Saguenéens from 1976 to 1980, each year improving his scoring and points. After an impressive 1979-80 season, in which Carbonneau scored 72 goals, 110 assists and only 6 penalty minutes, he was drafted 44th overall in the 1979 NHL Entry Draft by the Montreal Canadiens.

Carbonneau played his first 2 seasons of pro Hockey with the American Hockey League / AHL Nova Scotia Voyageurs, and finished third and first in team scoring, with 88 and 94 points respectively, during his two seasons with the Voyageurs. Carbonneau also made his NHL debut with the Canadiens in 1981, playing in just 2 games, and had 1 assist.

Carbonneau made the Canadiens team for the start of the 1982-83 season, and never looked back. An astute student, he was quickly paired with captain Bob Gainey, where he learned the tricks of the trade from one of the best defensive forwards the league has ever seen. In the company of the master, Carbonneau perfected his skills, frustrating the NHL’s top snipers for years to come. Just like Gainey had done four times before him, Carbonneau was awarded the Frank J. Selke Trophy three times (1988, 1989, 1992).

A masterful penalty killer, Carbonneau could always keep his opponents on their toes. Never one to shy away from a shot blocking opportunity, he would throw himself in front of pucks with precision timing. “Carbo” also still holds the team record with 27 career shorthanded goals, including a franchise-high seven PK markers in the 1984-85 season.

Named co-captain of the Canadiens, along with Chris Chelios, at the start of the 1989-90 season, Carbonneau only had to share the “C” for one year, becoming the full-time captain after Chelios left for Chicago at the end of the season.

In the 1993 Stanley Cup Final, the Canadiens faced Wayne Gretzky and the Los Angeles Kings, and in game one the "Great One" had a goal and two assists and the Kings won 4-1. Carbo approached coach Jacques Demers and requested he be allowed to shadow number 99 the rest of the way. Montreal won the next four games. It was Carbonneau who rightfully suggested to coach Demers that he should call for a measurement of Marty McSorley’s stick blade - the incident proved to be a major turning point of the series, as the Montreal Canadiens won the 1993 Stanley Cup championship on home ice at The Forum in Montreal.

On August 19, 1994, Carbonneau was traded to the St. Louis Blues in exchange for Jim Montgomery. Carbonneau had given the finger to a Journal de Montreal photographer who was lurking in the tree-lined fairways while he was playing a round of golf in Rosemere with Canadiens teammates Patrick Roy and Vincent Damphousse. That incident happened three days after the Canadiens had been eliminated from the 1994 NHL playoffs and the photo appeared on the front page of the Journal the next day.

Carbonneau was summoned to the Forum the next day to meet management and subsequently wrote a letter of apology to Montreal fans.

Here’s what Carbonneau told The Gazette’s Herb Zurkowsky after the photo appeared in the Journal: “I’m disappointed in the Journal putting the picture there. It wasn’t professional. They had no right to be there. We were playing golf, being quiet and trying to forget about our year.”

Carbonneau added: “I hope the fans don’t think I was giving them the finger. I was just unhappy to see the photographer there and that was my way of telling him to get out of there.”

He played in St. Louis for one season before being traded to the Dallas Stars for Paul Broten, October 2, 1995.

Carbo joined his former teammate, Gainey, who was now in the driver’s seat in Dallas – serving as the Stars’ general manager and was building a franchise that could win. On March 11, 1996, the Montreal Canadiens played their last game at the Montreal Forum, defeating the Dallas Stars 4-1. The game was televised on TSN and TQS in Canada, and on ESPN2 in the United States. The Stars' Guy Carbonneau, who had captained the Canadiens from 1989 to 1994, took the ceremonial opening faceoff.

Carbonneau later hoisted the Stanley Cup for the third time of his career in 1999, when the Dallas Stars won the championship. Carbonneau played one more season with the Stars before retiring after the team lost in the 2000 Stanley Cup Final to the New Jersey Devils.

After retiring,, Carbonneau joined the Montreal Canadiens as its Supervisor of Prospect Development before he was named part of the coaching staff in November of 2000. After serving as an assistant coach to Michel Therrien with the Canadiens from 2000 to 2002 he accepted the position as the special assistant to the general manager of the Dallas Stars in the summer of 2002.

In 2005, the Quebec Major Junior Hockey League created the Guy Carbonneau Trophy (Trophée Guy Carbonneau), awarded annually to the player in the QMJHL judged to be the best defensive forward.

On April 30, 2008, he was named candidate for the Jack Adams Award awarded to the best head coach of the year, but lost by 12 points to Washington Capitals coach, Bruce Boudreau.

On March 9, 2009, he was fired as the head coach of the Montreal Canadiens, with 16 games left. He was replaced by general manager, Bob Gainey.

On September 17, 2009, Carbonneau became an analyst for CBC Sports Hockey Night in Canada. He left CBC after the 2009–2010 season and joined Réseau des sports as an analyst. He also appeared in the first season (2010) of La série Montréal-Québec, as the head coach for the Montreal team.

On February 7, 2011, Carbonneau became head coach of the Chicoutimi Saguenéens, the team he co-owns. He resigned in July, 2011.