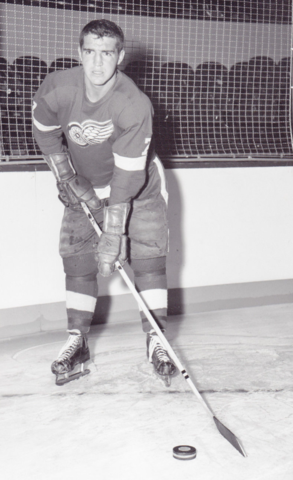 Laforge played two years with the Montreal Junior Canadiens before joining the senior Montreal Royals and Shawinigan Cataracts in 1956-57. He played five games with the powerful Montreal Canadiens as an injury replacement in 1957-58 but the club had too many qualified individuals. He spent the bulk of that season in the Quebec League where he scored 26 goals for the Cataracts and was named to the league's second all-star team.

In June 1958, he was traded to the Detroit Red Wings where he was a reserve and farmhand for seven years, playing in 123 games for the Red Wings, and scoring 15 goals over 4 seasons.

In the 1960-61 season, Toppazzini played with the AHL Hershey Bears, scoring 20 goals and 30 assists, helping the team to the 1961 Calder Cup finals, scoring 2 goals in the playoffs.

During the mid-'60s he was a proficient goal scorer in the AHL with the Pittsburgh Hornets and Quebec Aces.

In 1967 his rights were transferred to the Philadelphia Flyers when they purchased the Aces. Laforge was a solid two-way performer on the first year club in 1967-68, but was suckerpunched from behind by St. Louis Blues Noel Picard, and as a result, made it into only a couple of games the next year.

Laforge retired in 1973 after playing three years in the WHL with the Denver Spurs.