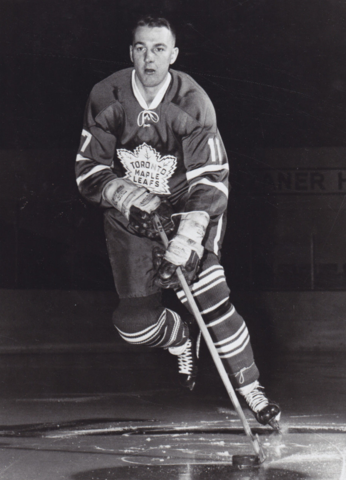 McKenney played just over two seasons with the Ontario Hockey Association / OHA Barrie Flyers. In 1953, McKenney was named captain of the Flyers, and led them to the George Richardson Memorial Trophy championship, the J. Ross Robertson Cup championship, and the 1953 Memorial Cup championship at the Winnipeg Amphitheatre.

McKenney made his professional debut with the Boston Bruins farm team in the American Hockey League / AHL, the Hershey Bears in the 1954 season. Injuries hampered his play that season, although he played well in the playoffs where the Bears made the Calder Cup finals, losing in six games to eventual champions Cleveland Barons.

McKenney was promoted to the Bruins in 1954, and made an immediate impact; he led the team in scoring, finishing second in Calder Memorial Trophy voting for rookie-of-the-year.

Over the next seven seasons, McKenney led Boston in scoring three more times (and never finished lower than third in team scoring), while his clean, elegant style—and skill as a defensive forward and penalty killer—gained recognition. He finished in the top four in league voting for the Lady Byng Memorial Trophy six straight seasons between 1957 and 1962. McKenney won the award in 1960, and was named to play in the All-Star Game in each of those seasons. 1960 proved to be McKenney's best season; in addition to the Lady Byng win, he led the league in assists, finished 8th in NHL scoring, and was voted to the Third All-Star Team.

1960 was also the start of the worst stretch in Bruins' history, when the team would miss the playoffs seven seasons in a row, the longest such stretch in NHL history before the 1967 NHL Expansion. While McKenney was named team captain in 1961 after long-time captain Fern Flaman was named as player-coach of the AHL Providence Reds.

McKenney was traded to the New York Rangers on February 4, 1963, and after playing parts of 2 seasons with the Rangers, McKenney was thrown in as part of a blockbuster trade that sent him along with Andy Bathgate to the Toronto Maple Leafs in exchange for Arnie Brown, Bob Nevin, Rod Seiling, Dick Duff and Bill Collins. Both Bathgate and McKenney played important roles in the Maple Leafs 1964 Stanley Cup championship, with McKenney scoring a point per game for Toronto in 1964 in both the regular season and playoffs.

The next season, the Maple Leafs sent McKenney down to their Rochester Americans minor league team. Following that season, Toronto released him outright, and he was claimed on waivers by the Detroit Red Wings. McKenney played only sporadically for the Red Wings, spending most of his time in the 1966 and 1967 seasons with their Pittsburgh Hornets AHL affiliate.

When the NHL expanded in 1967, McKenney was drafted in the 9th round of the expansion draft by the St. Louis Blues, a team that focused on drafting veteran players. He played effectively for the Blues, scoring 29 points in 39 games, before a knee injury caused management to send him down to the minors to rehab; it would prove to be his final NHL action.

Hired as a player-assistant coach by the Providence Reds, McKenney led Providence in scoring in 1969, and retired after the 1970 season.

Don McKenney was inducted in the Northeastern Hall of Fame in 1999.