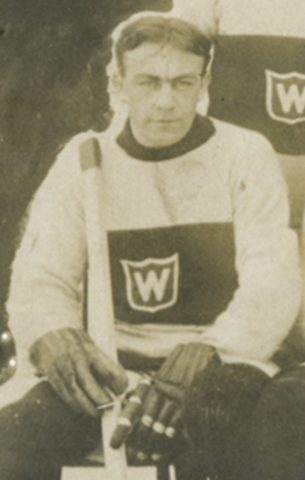 Chipchase was nicknamed Tutti by his friends and teammates, as he like to chew Tutti frutti gum.

Chipchase played with many of the greatest Hockey players of all time - Lester Patrick, Hod Stuart and Ernie "Moose" Johnson to name a few.

The Montreal Wanderers were a team full of many future Hall of Famers, and thus was difficult for Chipchase to make the starting lineup for Stanley Cup challenges, but Chipchase would be part of the March 1910 Stanley Cup winning team.

Chipchase and the Montreal Wanderers would also win the silver championship trophy, designated the 'Arena Cup', which was donated by the Montreal Arena Company. It was crafted from 90 ounces (2.6 kg) of sterling silver and designed by Birk's of Montreal. After the Wanderers won it in 1906 through 1908 as league champions, they were given the trophy permanently, a condition engraved on the silver of the trophy.

After retiring from Hockey, Chipchase became involved with his favourite summer sport - Baseball and Softball, and would be a umpire in many Montreal amateur leagues over the years. Chipchase was also know to referee Hockey games too.

NOTE
Bill Chipchase is sometimes referred to as Bill Chipcase, but this is a mistake, as Chipchase was a famous Montreal Athlete in the early 1900s, and came from a very large family, having 9 brothers and 1 sister. Chipchase also had 3 children - Ruth Florence on January 6, 1922, Gene Helen on July 25, 1923, and William Henry “Junior” on October 11, 1929.

Chipchase was married to Florence Beatrice Osborne - Circa 1920