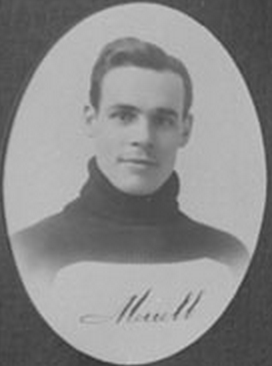 Merrill loved the city of Ottawa which was reflected by the fact he played his entire Hockey career in and around the city. At the age of 22 he was a member of the Ottawa Seconds of the OCHL in 1907-08. In just seven games he produced five goals, which garnered a considerable amount of attention.
He remained with the Seconds for another two seasons while also dressing for two games with the IPAHU Ottawa Cliffsides, and was a member of their Allan Cup-winning squad in 1909.

Although games themselves were competitive in those days, it was not uncommon for teams to loan members of their squad to other clubs if they were short of players. There was a gentlemanly standard set in that era, made easier by the fact the monetary gain was not at the central focus.

In 1911 and 1912, Merrill remained in the IPAHU playing with the Ottawa Edinburghs where he once again showed his knack for goal scoring, potting eleven in just 14 games. From 1912 to 1917 he was a mainstay with the Ottawa Senators of the NHA and although his points production dipped considerably playing against stronger talent, Merrill remained a solid contributor on defense. He was still with the team in 1917-18 during the formation of the NHL and is credited with having played in eight games in the league over two years, where he was held pointless

Merrill won the 1920 Stanley Cup with the Senators