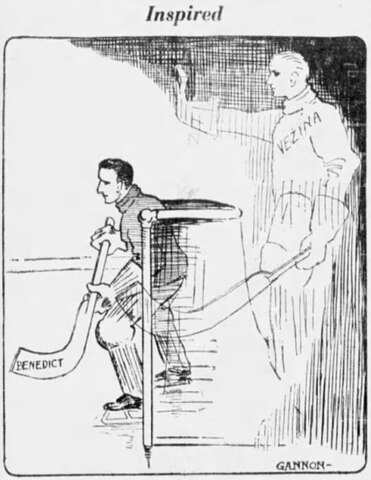 Text beneath the sketch in the March 29, 1926 issue of the Montreal Daily Star reads:

"The memory of his great predecessor in goaltending, who died on the morning of the Maroon-Ottawa battle, and in whose honor over 10,000 people in the Ottawa Auditorium stood silent for 60 seconds, had doubtless something to do with Benedict's great work on Saturday night."

Montreal Maroons, with Benedict posting a shutout, defeated the Ottawa Senators 1 goals to 0 on March 27, 1926 to claim the NHL championship by a 2-1 goal aggregate score (first game 1-1 tie). The Maroons then went on to beat the Victoria Cougars of the Western Hockey League (WHL) 3 games to 1 in early April for the Stanley Cup.