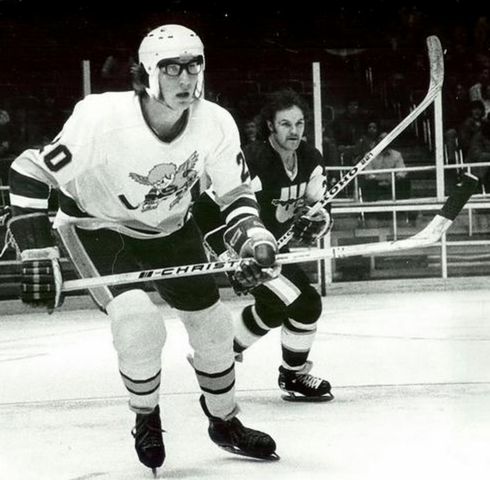 Carlson played in the World Hockey Association with the Minnesota Fighting Saints, Edmonton Oilers and New England Whalers, and in the National Hockey League for the Minnesota North Stars and St. Louis Blues. He was a fan favorite with his hard-hitting style, piling up 1111 penalty minutes in 508 professional games.

In Minnesota, the organist at the Met Centre played the theme music from 'Jaws" when he first appeared on the ice each night.

On April 4, 1979 during Minnesota's game at Chicago, Carlson suffered a serious back injury that required spinal fusion at the Mayo Clinic. He was out of the league for a year and a half, returning November 7, 1980. He played two years with the Blues from 1982-84.

Carlson was on the Minnesota (WHA) team that folded on Feb. 27, 1976. Signed as free agent with Edmonton on March 10, 1976. ... Claimed by Cleveland (WHA) in 1976 WHA Intra-league draft in June 1976. ... Was on Cleveland team that relocated to Minnesota in July 1976. ... Sold with Mike Antonovich, Bill Butters, Dave Keon, Jean-Louis Levasseur, Steve Carlson and John McKenzie by financially-troubled Minnesota (WHA) team to Edmonton (WHA) just prior to Minnesota team's folding in January 1977. ... Traded with Dave Keon, Steve Carlson, Dave Dryden and John McKenzie by Edmonton (WHA) to New England (WHA) for future considerations (Dave Debol), Danny Arndt, and cash in January 1977. Debol was sent to New England to complete the deal in June 1977. ... Missed part of 1978 playoffs with back injury. ... Missed parts of 1978-79 season with back and shoulder injuries. ... Was traded across leagues on Feb. 1, 1979, when New England (WHA) sent him to Minnesota (NHL) for future considerations. ... Retired for the first time in 1984 but came out of retirement as he was unhappy as an airfreight salesman and playing shinny twice a week in Minnesota, he came out of retirement in November 1986, some thirty months after having last played. Eight games later, he was done for good.

Carlson and his brothers, Steve and Jeff, played together on a line for Johnstown (NAHL) all of whom were terrorizing the league with their hits and fights in 1974-75 and were the inspiration for the Hanson brothers in the movie Slap Shot. Jack was slated to play the role of Jack Hanson in the film, but he was offered a contract by Edmonton Oilers (WHA) before filming began in 1976 and was competing in the WHA playoffs when filming started. He was replaced by former Johnstown (NAHL) teammate Dave Hanson