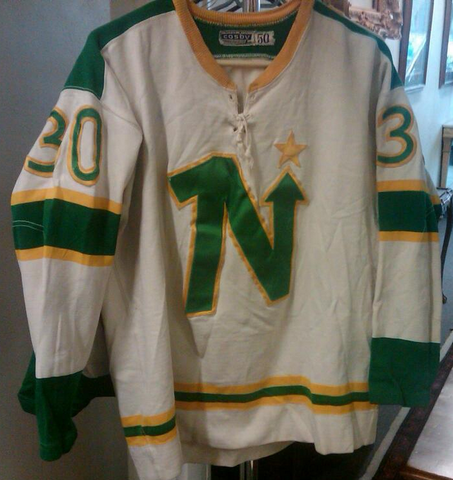 The North Stars only wore these Wilson double knit jerseys with Gerry Cosby tagging in the neck for Their inaugural preseason games before switching to General Athletic Dureen jerseys for Their first regular season game against the St. Louis Blues. Among the changes in this style are the tie-neck forehead with the solid yellow collar, original team logo with a more upright "N" that has Has the portion of the top left That slants down Rather than sticking straight out.

The NHL awarded one of six expansion franchises to Minnesota on February 9, 1966. In addition to Minnesota, the five other franchises were California (Oakland), Los Angeles, Philadelphia, Pittsburgh and St. Louis.

The "North Stars" name was announced on May 25, 1966, following a public contest. The winning name was submitted by 52 entries. Then Gov. Karl F. Rolvaag drew one entry for the prize of a $100 U.S. savings Bond and 2 season tickets. His selection was Mr. and Mrs. William R. Swanson of Shoreview, a St. Paul suburb. The name is derived from the state's motto "L'Étoile du Nord", which is a French phrase meaning "The Star of the North".

Months after the naming of the team, ground was broken on October 3, 1966, for a new Hockey arena in Bloomington, Minnesota. The home of the North Stars, the Metropolitan Sports Center (or Met Center for short), was built in 12 months at a cost of US$7 million.

The arena was ready for play for the start of the 1967–68 NHL season, but portions of the arena's construction had not been completed. Spectator seats were in the process of being installed as fans arrived at the arena for the opening home game on October 21, 1967 vs the Oakland Seals.