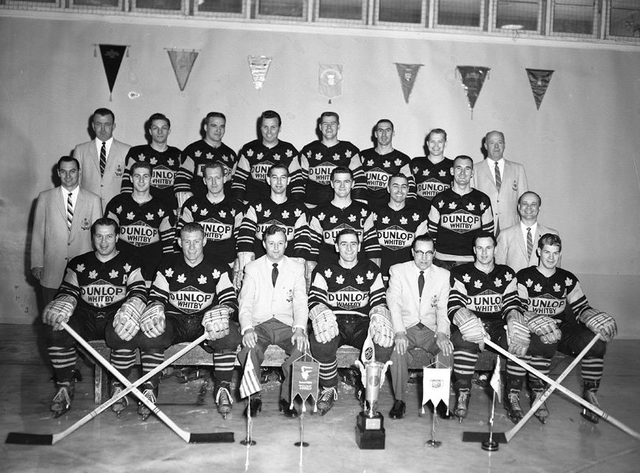 The Dunlops were Canada's representative to the 1958 World Championships, as the defending Allan Cup champions. The team took an ocean liner to the championships in Norway because team manager Wren Blair was terrified of flying. Everyone was sick for six days because of the rough waters but the chance to restore Canada's pride was worth it. After a 14 game exhibition tour of Europe the Dunlops competed at the World Championships in Oslo, Norway.

The original Whitby Dunlops were founded in 1954 when the 1952-53 Oshawa Generals were disbanded after their arena burned down. Some of the players, along with coach and manager, Wren Blair, formed the Oshawa Truckers for the 1953-54 season.

The Dunlops won the Allan Cup in both 1957 and 1959 and won a gold medal at the World Ice Hockey Championships in 1958 at Oslo, Norway.