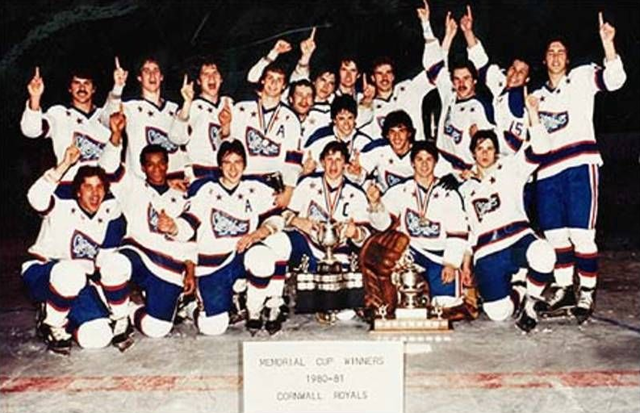 The Cornwall Royals, a team from Ontario, represented the province of Quebec in the Memorial Cup tournament.

This would be Cornwall's last season in the QMJHL. The Royals would play in the Ontario league the next season.
And the Royals wanted to go out in a blaze of glory. They finished with the league's best regular-season record -- 44-26-2 -- scoring a league-high 403 goals in the process.
Hawerchuk won the QMJHL scoring championship, his 183 points providing a 17-point margin over Alain Lemieux of the Trois-Rivieres Draveurs. Hawerchuk also led the league in goals (81) and assists (102).

The Royals became the fourth team to win back-to-back Memorial Cup championships when they defeated the Kitchener Rangers 5-2 behind three goals from Scott Arniel before a sellout crowd of 4,500.
It was the Royals' third Memorial Cup title in 12 years.

The 1981 tournament belonged to Dale Hawerchuk, who earlier in the week had been named major junior Hockey's player of the year.
For the second straight year he was the tournament's top scorer. And this time he was named the most valuable player. He set one tournament record by scoring eight goals and tied another by totaling 13 points.