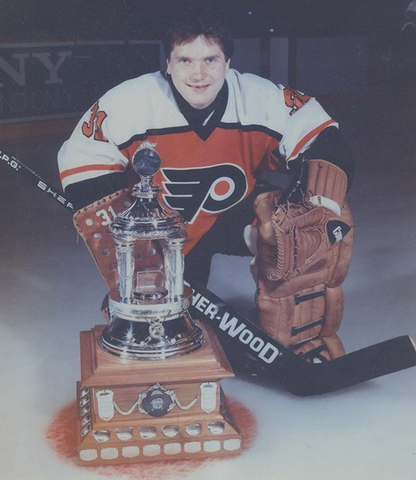 In 1977, Lindbergh made his debut for the Swedish junior national team, winning the European Junior Championships and winning recognition as the best goalie in the tournament. After one year in Division One Hockey, Lindbergh was forced to change clubs in order to reach his goal of becoming a pro goalie. In 1979, he joined AIK Solna in Elitserien (the Swedish Elite League). He was 20 years of age at the start of the season. Lindbergh played in 31 games, recording 2 shutouts. That year, he starred in the World Junior Championships and was selected the best goaltender in the tournament.

Lindbergh started his North American Hockey career during the 1980–81 season by playing one and a half seasons for the Maine Mariners of the American Hockey League. In 1980-81, Lindbergh backstopped the Mariners to the finals of the Calder Cup (AHL championship) losing 4 games to 2.

Lindbergh would win the AHL's MVP award in 1981.

Lindbergh led the NHL with 40 victories during the 1984–85 season and on June 13, 1985 at the Metro Convention Center in Toronto, Pelle Lindbergh was announced as the winner of the Vezina Trophy. The trophy was presented to him by boyhood idol, Bernie Parent (himself a two time Vezina winner). Parent, the Flyers goaltending coach, had become not just a mentor to Lindbergh, but a close friend. Upon accepting the award, Lindbergh dedicated the honor to Parent.