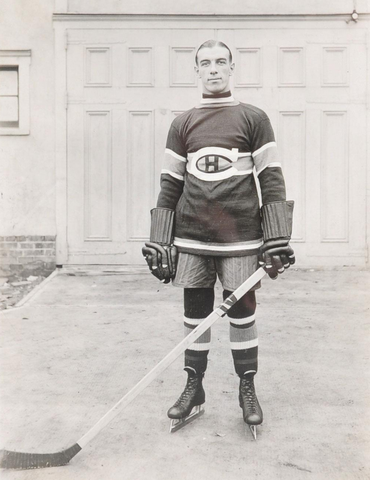 He then played in the Northern Ontario Hockey association/ NOHA for Iroquois Falls Papermakers in the 1920-21 season.

Boucher then signed as a free agent with the Montreal Canadiens, December 13, 1921, scoring 17 goals, 5 assists in his NHL rookie season.

Boucher scored 24 goals, 7 assists in 24 games in his second season, and also led the NHL in penalty minutes with 55.

In his third season, 1923–24 Boucher was placed on a line with rookie Howie Morenz and Aurele Joliat that formed a high-scoring trio. Boucher led the Canadiens in scoring, and was runner-up in the league scoring honors. The team defeated defending champion Ottawa in the NHL playoffs winning the 1924 O'Brien Trophy as NHL champions, and then played the Calgary Tigers in the Stanley Cup Final. Boucher scored 1 goal, 1 assist in game 1 of the final, and 1 goal in game 2, as the Canadiens defeated the Tigers in 2 straight games of the best of 3 championship. The Canadiens had won their second Stanley Cup in team history, and the first as an official NHL franchise.

The Montreal Forum opened on November 29, 1924, with the Toronto St. Pats as guests for the inaugural match. The Canadiens came out on the winning end of the 7-1 game and Billy Boucher had the honor of scoring the first goal at the new venue and finished the night with the first hat trick ever scored at the Forum.
Boucher would again help the Canadiens win the the NHL championship and the 1925 O'Brien Trophy, but lose in the Stanley Cup finals to the Victoria Cougars.

Boucher's game was starting to change, as he was scoring less and taking more penalties, and during the 1925-26 season, Boucher had a NHL career high of 112 penalty minutes, and only 8 goals.

Boucher started the 1926–27 season in Montreal, but was traded to the Boston Bruins for Carson Cooper with both teams holding right of recall, January 17, 1927, and Boucher would help the Bruins reach the 1927 Stanley Cup finals, losing to the Ottawa Senators.

Players returned to original teams May 22, 1927. Boucher was then traded to the New York Americans for cash on October 17, 1927, where he would finish his NHL career, scoring 5 goals, 2 assists in 43 games.

Boucher missed only three games in his five complete seasons with Montreal, finishing among the top five scorers both on the team and in the league each year.

Boucher would continue to play Hockey for the New Haven Eagles in the Canadian–American Hockey League / Can-Am from 1928 to 1931, the Can_am Bronx Tigers for the 1931-32 season and then coached the Quebec Granites for the 1932-33 season.