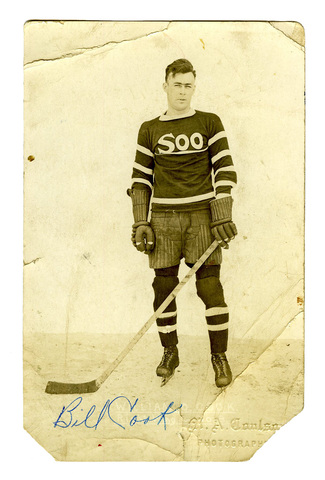 Cook joined the Kingston Frontenacs' junior Hockey team in 1913 and played for two seasons before his career was interrupted by the First World War.

He volunteered to join the Canadian Expeditionary Force in 1915, and served with the Canadian Field Artillery for nearly two years in France and another at the Belgian front. Cook participated in several engagements, including at Ypres, the Somme, Vimy Ridge and Hill 70. He then fought into 1919 in Siberia as part of the allied intervention in the Russian Civil War.

Upon his return from the war, Cook rejoined the Frontenacs for one season, and suited up with the Frontenacs' intermediate outfit. His inspired play helped the team reach the OHA finals that year.

Cook also played for the Saskatoon Crescents of the Western Canada Hockey League (WCHL) and the New York Rangers of the National Hockey League (NHL) .

Bill Cook was officially the first player signed by the New York Rangers and was named the Rangers 1st Captain - A prolific scorer, Cook led the WCHL in goals twice and the NHL three times. He was named an all-star seven times between the two leagues. Known as "The Original Ranger" - Bill Cook scored the first goal in Rangers franchise history when the Rangers made their NHL debut on November 16, 1926, against the Montreal Maroons. Cook scored the Rangers 1st goal, which also stood up as the winner, in a 1–0 victory.

Cook also led the Rangers to two Stanley Cup Championships in 1928 and 1933 - Turning to coaching following his playing career, Cook led the Cleveland Barons to two Calder Cup Championships and the Minneapolis Millers to a United States Hockey League Championship.

Cook was named coach of the New York Rangers during the 1951–52 NHL season where he remained until his retirement in 1953.

Bill Cook was inducted into Canada's Sports Hall of Fame in 1975.