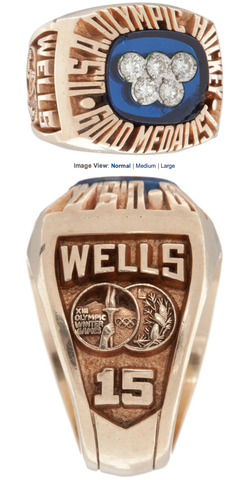 The ten karat yellow gold ring features five real diamonds set in a blue stone (small chip at lower right) on the face, encircled by raised text reading "USA Olympic Hockey Gold Medalist." Left shank holds Wells' surname and jersey number, framing the logos of the Lake Placid Games. The right shank features hockey iconography, the year "1980," and the final scores of the USSR semifinal and Finland final matches. The interior band is engraved with the scores and opponents in the earlier rounds of Olympic competition and a scripted "Miracle on Ice." Stamping of "Balfour 10K" is here as well.