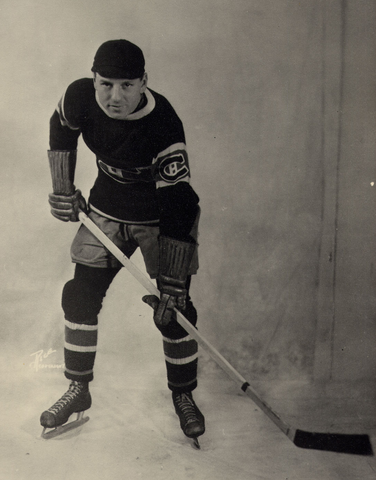 Joliat began his organized Hockey career in 1916, playing for several Canadian amateur teams in Ottawa and Iroquois Falls, Ontario. In 1922, however, Joliat was awarded to the Montreal Canadiens in compensation for the Saskatoon Sheiks of the Western Canada Hockey League signing aging superstar Newsy Lalonde. At first, the deal of an unknown for the greatest player in the game was wildly unpopular with Habs fans, but the "Little Giant" proved an immediate success on the ice. The following season, Joliat helped the Canadiens to the Stanley Cup in 1924 over the WCHL's Calgary Tigers. He helped the Canadiens win two more cups in 1930 and 1931.

Joliat proved noteworthy as a two-way forward, particularly for the ability to counterattack after a breakup. Despite his lack of size—at 5′7″ and 136 lbs, Joliat was one of the smallest players in the game—he was also notable for a refusal to back off from on-ice confrontations.

His breakout season was 1925, when teamed with Howie Morenz and Billy Boucher, Joliat scored 29 goals to lead the NHL, and his 41 points would be a career high. He would remain an impact scorer for the Habs through the 1938 season, and retired the following year, reportedly devastated by Morenz's recent death.

He was inducted into the Hockey Hall of Fame in 1947.

In 1985, Joliat skated around the Montreal Forum to a huge ovation as a "special treat" for the fans. Despite falling twice, he quickly stood up and finished his skate, the trademark black cap he wore back in his playing days held in his hand.

Named to the inaugural NHL First All-Star Team at left wing in 1931.

Winner of the Hart Trophy as the NHL's most valuable player in 1934.

Named to the 75th Anniversary All-Time Team by the Canadiens.

His number 4 jersey was "co-retired" in 1984, having been previously retired in Jean Béliveau's honour.