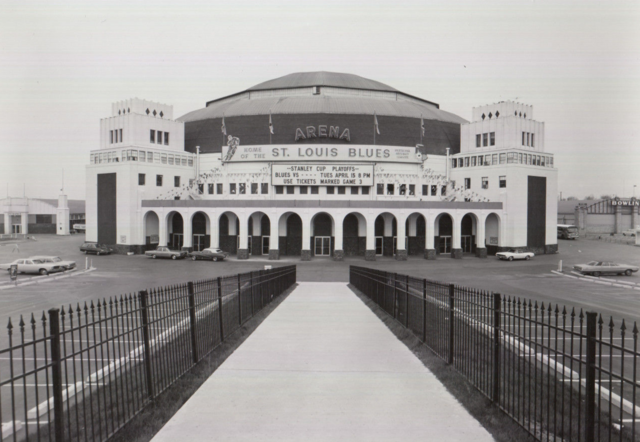 By the time the NHL's St. Louis Blues began playing at the Arena in 1967, it had fallen into such poor condition that it had to be heavily renovated in time for the 1967–68 season. As a condition of getting the expansion franchise, Blues owner Sid Salomon Jr. purchased the Arena from the Chicago Black Hawks, and spent several million dollars renovating the building and adding some 3,000 seats to bring the total to almost 15,000. It never stopped being renovated from that day on, and held almost 20,000 seats by the time the Blues left the Arena in 1994. Many fans considered its sight lines the best of any arena in the league, which is remarkable considering that it was not originally built for hockey. It was also known as one of the loudest arenas in the league.

In 1977, the Arena and the Blues were purchased by Ralston Purina, which rechristened the building the Checkerdome after the company's checkerboard logo. By 1983, the cereal and pet food corporation had lost interest in the Blues and the Arena, and forfeited the team to the league. The team was nearly moved to Saskatoon, Saskatchewan before it was purchased by Harry Ornest, a Los Angeles-based businessman, who promptly returned the Arena to its original name.

The Saint Louis University Hockey team used the arena from 1970 to 1979, and the St. Louis Vipers of the Roller Hockey International League / RHI for one season 1993–1994.

Gustel R. Kiewitt was the architect and the Boaz-Kiel Construction Company as the general contractor.

Kiewit's design called for a lamella roof supported by 20 cantilever steel trusses, eliminating the need for view-obscuring internal support pillars. The lamella design consisted of Douglas fir ribs, 3.75 inches thick, 17.5 inches wide and 15 feet long, fitted together diagonally and giving the appearance of fish scales. The huge structure was completed in 1929, just over a year after construction began. At 476 feet long and 276 feet wide, it was behind only Madison Square Garden as the largest indoor entertainment space in the USA. A 13-story building could have been erected inside of it.