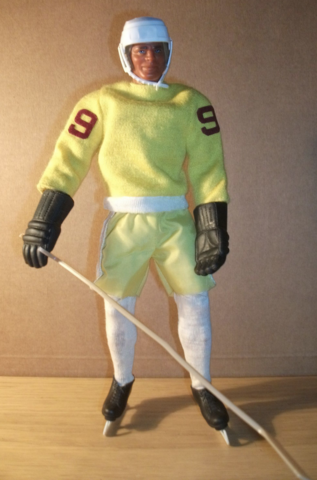 Big Jim was a 10 inch action figure toy produced by Mattel from 1971 to 1986. This figure line sits as the 3rd most popular ever behind only G.I. Joe and Star Wars. Big Jim was the action hero who could master any sport on the way to his next adventure. The Big Jim basic figure had a push button in the back that moved right arm down, like a karate chop, and had bulging muscles of the arm. Other functions were created for some characters: Torpedo fist, Captain Hook and Boris action figures had a telescope right arm. Big Jim Double Trouble, Zorak, Captain Drake and 004 had a changing face. Captain Flint had a right arm firing caps. On the negative side the rubber arms deteriorate into a mottled brown colour in excessive heat and collect dirt like crazy. It's easy to imagine Jim getting a sports equipment lease and trekking up a mountain or participating in Formula 1 races - he is a man's man.