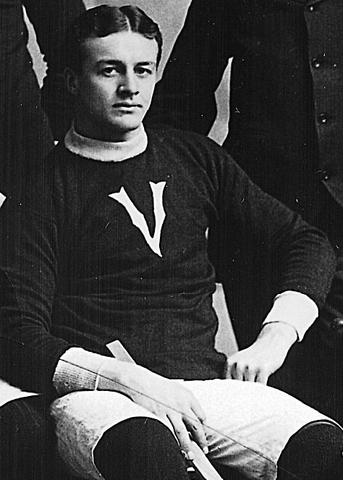 Charles Graham Drinkwater (February 22, 1875 – September 27, 1946) was a Canadian Ice Hockey player. Drinkwater played for the Montreal Victorias in the Amateur Hockey Association of Canada (AHAC) in the early era before professionalism. Drinkwater was a rare player in that he had the ability to play both forward and defence with equal skill - Drinkwater was an accomplished Hockey and football player in his teens, he starred with the Montreal Hockey Club junior team in 1892–93 - After graduating from McGill in 1895, Drinkwater joined the Victoria Hockey Club of Montreal. Drinkwater scored nine goals in eight contests, helping the Victorias win the Stanley Cup. Drinkwater would also win the cup in 1896, 1897, 1898 and 1899 (as Captain). Drinkwater's excellent skating and smarts made him one of the best players early in the game of hockey. Drinkwater was named one of the original trustees of the Allan Cup by donator H. Montagu Allan in 1909 - After hockey, Drinkwater became a partner in Drinkwater Weir & Company, a stock-broker business and a supporter of music orchestras in Montreal - Drinkwater was inducted to the Hockey Hall of Fame in 1950