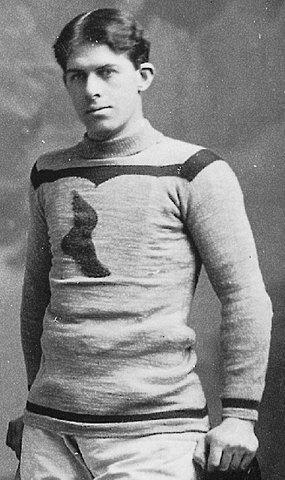 Farrell first played for the Montreal Shamrocks in the Canadian Amateur Hockey League in 1897. Born in Montreal, Quebec, Farrell helped lead the Shamrocks to Stanley Cup victories in 1899 and 1900 - He once scored five goals in a game against Quebec on March 2, 1901, and was known as one of the men responsible for moving the focus of Hockey from individual play to team, or "combination," play.

Farrell authored one of the oldest known Ice Hockey books in 1899 while playing for the Shamrocks. He wrote the book in the middle of his career, in response to demand. He stated in the introduction his work was borne out of "the necessity of a book on Hockey". The book, Hockey: Canada's Royal Winter Game is 122 pages long, is less of an overall discussion of the sport but more of hand-book, with approximately a third of the book devoted to the "Science of Hockey". The chapter describes general strategy of the game, and features in-depth commentary on the position by the star players of the day. The book gives a brief history of the sport, describes the benefits of playing it, and gives advice to players in a context independent to strategy and practices pertaining to the team as a whole. The last chapter gives three sets of rules for Ice Hockey; it uses CAHL rules for Quebec, Ontario Hockey Association (OHA) rules for Ontario, and Amateur Hockey League of New York rules for the US. Within the chapters of the book are placed photographs and short articles on the leading teams of the era. Presently, only four copies are known to exist - A second work, in two volumes, was published in 1901–4 for an American readership in a well-known series put out by Albert Goodwill Spalding. Another book by Farrell in that series came out in 1907 and was reissued in 1910. It outlines the origins of Hockey and the rules in Canada and the United States and includes comments by Canadian Hockey stars on the art of playing various positions.

Both as a player and as a writer, Farrell stimulated the development of ice Hockey in its early days - He was inducted into the Hockey Hall of Fame in 1965