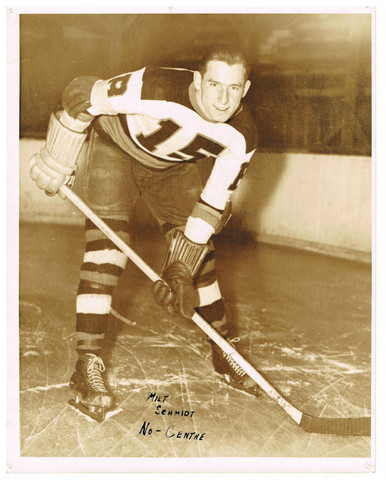 Milton Conrad Schmidt (born March 5, 1918) is a former Canadian Professional Ice Hockey centre, coach and general manager, mostly for the Boston Bruins of the National Hockey League / NHL - Schmidt played junior hockey with Dumart and Bauer in Kitchener, Ontario before their rights were all acquired by the Bruins in 1935. After playing a final year of junior hockey in Kitchener, Ontario, and half a year with the Bruins' AHL Providence Reds farm team, Schmidt would be called up to the Bruins during the 1937 season. He would quickly prove himself as a hardnosed center, a skilled stickhandler and smooth playmaker -
Schmidt and his childhood friends Bauer and Dumart would be teamed together in the NHL as well. They formed the famous Kraut Line, and were a strong and dependable line for the Bruins for most of the following fifteen seasons. They were a key ingredient to the Bruins' success as they rampaged to the regular season title and a hard fought Stanley Cup victory in 1939. The following season would be Schmidt's true coming out party, as he led the league in scoring and guided the Bruins to another first place finish and the third most goals in team history to date -
The 1941 season saw Schmidt spearhead the Bruins to their second Cup win in three years. However, the powerhouse Brown and Gold were decimated by World War II the following year as Schmidt, Bauer and Dumart enlisted in the Canadian military and superstar American goaltender Frank Brimsek enlisted with the United States Coast Guard. The Kraut Line found success playing hockey for the Ottawa RCAF team by winning the Allan Cup before heading overseas. Schmidt, Bauer and Dumart would end up missing three productive NHL seasons due to their service in the War -
Schmidt returned for the beginning of the 1946 season. He resumed his starring ways and finished fourth in league scoring in 1947. Named captain in 1951, Schmidt won the Hart Trophy as the league's most valuable player that year. He retired as a player partway through the 1954–1955 to take over head coaching duties, replacing Lynn Patrick - He would coach the Bruins up to the 1966 season with a year and a half hiatus. He also was Boston's assistant general manager. After coaching the Bruins for 11 seasons Schmidt was promoted to the general manager position in 1967 just as the league ushered in six new franchises, doubling in size. Schmidt would prove to be a great architect in the new era of the NHL, acquiring and drafting several key players to build a Bruins team that won two more Stanley Cups titles in 1970, 1972. His biggest deal was a blockbuster as he acquired youngsters Phil Esposito, Ken Hodge and Fred Stanfield from the Chicago Black Hawks in exchange for journeymen Pit Martin, Gilles Marotte and Jack Norris -
After his long and loyal career in the Bruins organization, Schmidt left the team to become the first General Manager of the expansion Washington Capitals for the start of the 1975 season. Unfortunately for Schmidt, the Capitals set a benchmark in futility that still stands as an NHL record today, as the new franchise finished the year with a minuscule 21 points with the worst record in the 18 team league (8 wins - 67 losses -5 ties).