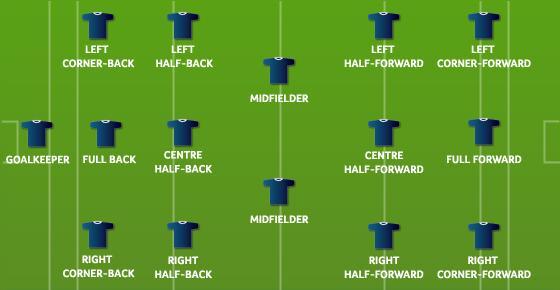 Hurling is played on a pitch 135 – 145 m long and 80 – 90 m wide. The goals at each end of the field are formed by two posts, which are usually 6 m high, set 6.4 m apart, and connected 2.44 m above the ground by a crossbar. A net extending in back of the goal is attached to the crossbar and lower goal posts. The same pitch is used for Gaelic football; the GAA, which organizes both sports, decided this to facilitate dual usage. Lines are marked at 13 m, 20 m, 65 m and 45 m in gaelic football from each end-line. Shorter pitches and smaller goals are used by under-13s and younger - Teams consist of fifteen players and they line out as above - The panel is made up of 24–30 players and 5 substitutions are allowed per game. No exceptions are ever made.