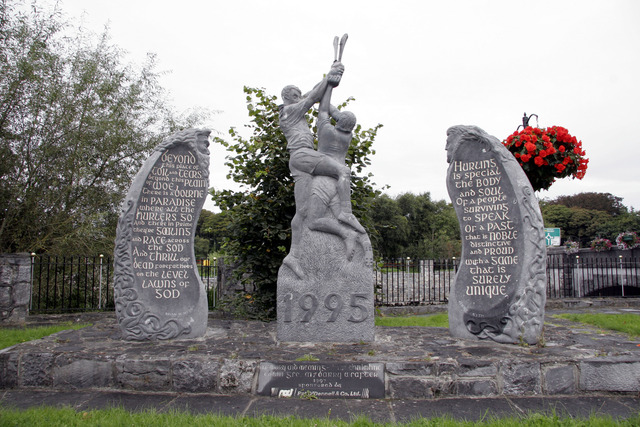 This piece was made as a testament to the Clare hurlers triumph in the All Ireland Final of 1995 after eighty years in the doldrums.

The sculpture was created by Barry Wrafter and Colin Grehan. The sculptors picked the site across from the Mill because of its accessibility and can be easily viewed from the road by passing traffic.

The sculpture is made of Irish limestone and it consists of three over life size stones. Two of the stones have heads carved into the apex reflecting the old and new. They also have foliage carved into the side. In a bowl shaped depression in these stones is carved poetry about the beauty of the game of hurling. The poets that penned these poems are Jimmy Smyth and Brian McMahon.

The centre stone depicts two hurlers rising for the ball, which is the essence of the game. The date at the bottom pertains to the year they won the All Ireland Final.

The sculpture took three months to complete in all and was erected in August 1997.