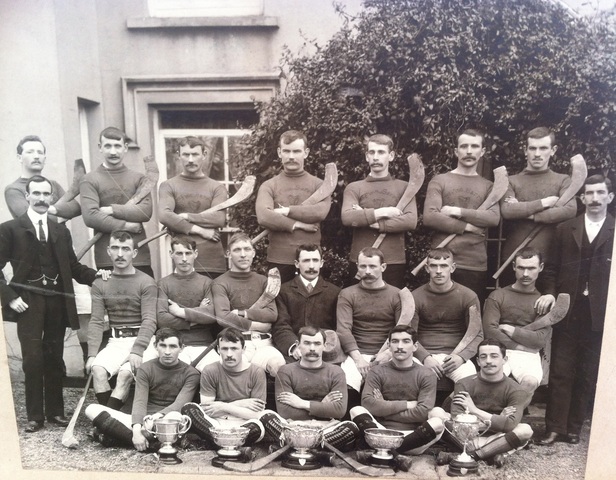 For three consecutive years (1904-‘06 ) they dominated the senior championship winning three counties in a row as confusion reigned in that period; the 1904 final was two years behind schedule; the Barr’s, conquerors of All-Ireland champions Dungourney in the semi-final, gained a bloodless victory when, an eternity later, final opponents Castletownroche failed to put in an appearance. Delays continued and the 1905 competition was never played. In the belated 1906 county renewal Barr’s and Ballymartle qualified for the final and it was agreed that the championships of both 1905 and 06 would be at stake. Ballinhassig was the venue and on a bitterly cold day in early February 1907 Barr’s were victorious.

This was probably the last match Rocket Sheehan played for the Blues as he emigrated to Detroit. He carried his camán with him and was instrumental in organising a hurling team in his new home district.

Old time scribes agree that some of the Barr’s legends were amongst the games’ greatest exponents. Bachus Leary had few equals, Christy Young was rock solid and a match for any mortal, the Harringtons were exquisite hurlers while Christy Nolan’s stickwork was not matched until the emergence of Tipperary great, D’Arcy. Patcheen Sullivan was another master craftsman and along with Bachus was chosen by Blackrock for their All-Ireland conquering side in 1903. Famed hurling families, the Dooleys and Sheehans, combined to form the district’s first camogie club in 1905; Mary Agnes Sheehan ( sister of “Rocket”) and Katie Dooley (daugher of Tom) formed Clan Eimear based in the Gould Street area who were trained down in the Lough by Liam Ruiséal, the well known bookseller. However, not all were pleased with the prospect of women playing hurling and Fr Fleming of the Lough Parish condemned what he termed the unfeminine activities of the camogie players. Even though their membership was never continuous they remain as one of the oldest surviving clubs in the county.