Cuchulainn Slays the Hound of Culain 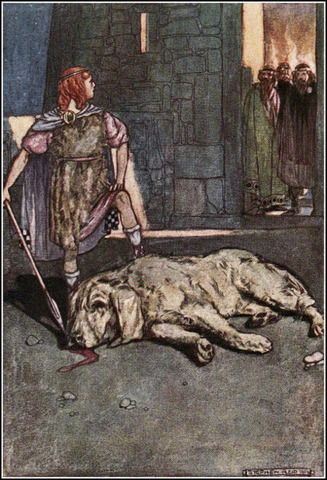 Hurling has a major role in the legend of Cuchulainn, who was a Herculean type of hero. The legends, which were revived from extinction by Sechan Torpeist, a 7th century bard, tells the story of how Setanta, the nephew of King Conchobair Mac Neasa of Ulster, receives the name of Cuchulainn:

Setanta journeys to his uncle's court to join the boy's corps. He shortened his walk by hurling his silver sliotar (ball) and then throwing his bronze hurley stick after it. He would run and catch both the sliotar and the hurley stick before they hit the ground. Soon he arrived at court, and his hurling abilities amazed the boys of the corps. Legend has it that he was able to score with ease and when he guarded the goal he never let a shot in.

One day King Conchobair was invited to a banquet at the house of Culainn and asked his nephew to join him. Setanta agreed to go after he finished playing a hurling game. While at the feast Culainn asked the king if all the guests had arrived. King Conchobair, forgetting about Setanta, said yes and Culainn unleashed his hound to guard the house.

When Setanta arrived at the feast the great hound leapt up to attack him, but Setanta quickly hurled the sliotar at the hound and it went down the beast's throat. The boy immediately grabbed the stunned hound by his feet and smashed its head into the floor of the stone courtyard killing him.

When the guests heard the baying of the hound they ran outside and were surprised to see Setanta alive and the beast dead. King Conchobair was overjoyed but Culainn was sad at the loss of his favorite hound. Setanta offered to find a hound worthy of the one he had slain and vowed to guard Culainn's home until such an animal could be found. Thus Setanta became known as Cuchulainn, which translates to "the hound of Culainn".