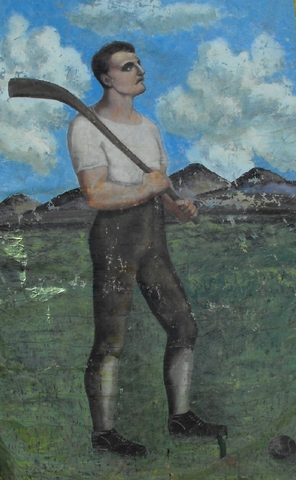 The Carrahan Flag, thought to be the oldest hurling trophy in existence, was played for in Kearney's Field in Clooney - 1888.

The origin of the Flag, a magnificent five feet by four feet oil painting, believed to depict a famed hurler and athlete named Patrick McGrath, from Glandree, is lost in antiquity, but it is as prized to-day in Tulla as it was the day the parish's hurlers won it in Kearney's field and carried it back in triumph to the village of Clooney.

The competition for what was known as the Carrahan Tournament commenced in September 1888 and attracted many of the top clubs in Clare. Two teams from Quin and two from Clooney competed in the competition.
Feakle and Tulla were regarded as the kingpins of hurling in Clare at the time. Considering the interest in the tournament there was an amount of preparation for the contest. In the first half Tulla played with the fall of ground in their favour. The 'Saturday Record' remarked that it was impossible to describe the scientific hurling that ensued. Feakle were ahead by a goal and a point after ten minutes. Soon, Tulla were thick in the affray with a point followed by a goal from John McKenna to level matters.

After the restart Feakle’s Henchy pointed, but the game was quickly leveled by Tulla. With ten minutes left to play, the large attendance was anticipating a draw, with a half hour of extra time to decide matters. However, during the final stages Tulla hammered home a goal and a point to leave the final score Tulla 2-03 Feakle 1-2.

The Carrahan Tournament was only played once.