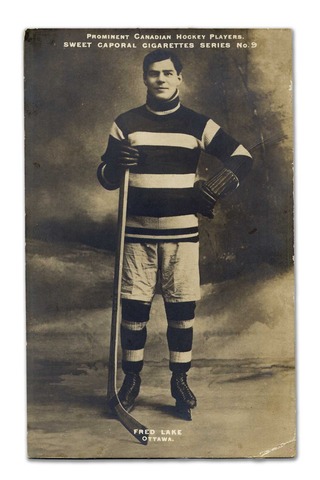 Fred Edgar Lake (March 12, 1883 - December 1, 1937) was a Canadian Professional Ice Hockey player. He was one of the first professional players and he played 181 games in various professional and amateur leagues, including the National Hockey Association, Eastern Canada Amateur Hockey Association, and International Professional Hockey League - Born in Moosomin, Saskatchewan, Fred Lake first played senior-level hockey for the Moosomin hockey club in 1900–01. In 1902, he turned professional with Pittsburgh of the Western Pennsylvania Hockey League (WPHL). In 1903, he helped Pittsburgh win the "US Professional Championship" against Houghton, Michigan. For 1903–04, he would sign up for the new International Professional Hockey League (IPHL) first playing for Sault Ste. Marie, Michigan before moving to Portage Lake-Houghton, where he would play for three seasons until 1907. He moved back to Canada in 1907, playing first for the Winnipeg Strathconas then the Winnipeg Maple Leafs. As a member of the Maple Leafs he would play in an unsuccessful Stanley Cup challenge against the Montreal Wanderers in 1908. For the 1908–09 season, he re-signed with Pittsburgh of the WPHL. However, after three games he was released because of his rough play. He was signed by the Ottawa Hockey Club of the Eastern Canada Amateur Hockey Association (ECHA) and helped Ottawa win the Stanley Cup. He would remain a player with Ottawa for four seasons, winning another Stanley Cup championship in 1911, before being traded to the Toronto Ontarios in 1913, where he played for one season. For his final season, he returned via a trade to Ottawa. He only played two games for the Senators that season and retired after the season - Lake's most prominent years came alongside defense partner Hamby Shore. The two first teamed up in Winnipeg in the Manitoba Hockey League before spending 4 years together in Ottawa. Standing tall before goalie Percy Lesueur, the duo of Lake and Shore helped the Senators capture the 1909 and 1911 Stanley Cup - Despite losing an eye in the rough International League in northern Michigan, Fred Lake played nine years as a professional hockey player.