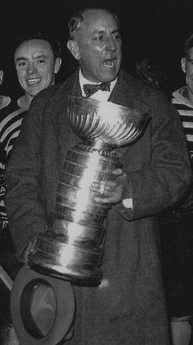 Frederic McLaughlin (June 27, 1877 – December 17, 1944) was the first owner of the Chicago Black Hawks - In 1926, he was granted an expansion franchise by the National Hockey League. McLaughlin had been a commander with the 333rd Machine Gun Battalion of the 86th Infantry Division during World War I. This Division was nicknamed the "Blackhawk Division", after a Native American of the Sauk nation, Chief Black Hawk, who was a prominent figure in the history of Illinois - McLaughlin evidently named the hockey team in honor of the military unit - Most of the Blackhawks players were from the Portland Rosebuds of the Western Hockey League purchased from WHL owner Frank Patrick for $100,000 - During his 18 years as owner, McLaughlin would lead the franchise to two Stanley Cup Championships, in 1934 and 1938 - His flair was always a factor in the operations of the Chicago hockey club. He and his coaches decided to speed up the pace of the game by using three sets of forward lines and substituting players at three minute intervals instead of keeping the same players on the ice for long stretches - At the time Major McLaughlin acquired the Chicago Blackhawks, he was married to Irene Castle, a famous dancer and film actress. She is credited with creating "Indian Head" design of the first Blackhawks sweater / jersey - He was inducted into the Hockey Hall of Fame in 1963