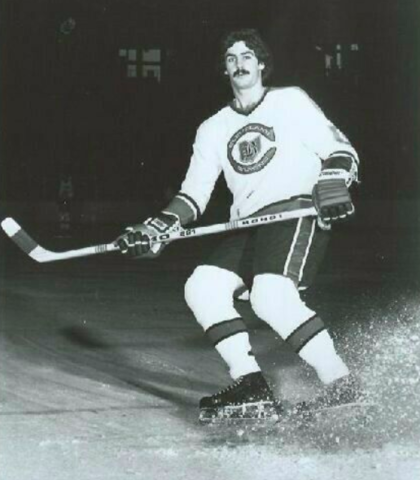 Played high school Hockey at Boston Tech High School from 1968 to 1970, then joined his college team, the Polar Bears at Bowdoin College from 1970 to 1974.

Ahern was then signed by the NHL California Golden Seals and sent to their minor league affiliate, the Salt Lake Golden Eagles in the Central Hockey League / CHL for the 1974-75 season. He also played 3 NHL games for the Seals, scoring 2 goals, 1 assist. He split the 1975-76 season between the Seals and the Eagles.

Ahern played for the USA team at the 1976 Canada Cup, scoring 2 goals in 5 games. The Golden Seals had relocated to Cleveland, Ohio, becoming the Cleveland Barons for the start of the 1976-77 season. Ahern scored the very 1st NHL goal for Cleveland on October 6, 1976 vs Rogie Vachon of the Los Angeles Kings. He only played 25 games for the Barons that first season, scoring just 4 goals, 4 assists.

Ahern started the 1977-78 season in Cleveland, but after scoring just 3 goals in 36 games, they traded him to the Colorado Rockies in January. He finished the season in Colorado, where he played his final 36 NHL games.

Ahern then played for the AHL Binghamton Dusters, where he gained his scoring touch back, with 25 goals, 32 assists during the 1978-79 season. He split the next season between the AHL Adirondack Red Wings and the CHL Oklahoma City Stars.

Fred Ahern was inducted into the Massachusetts Hockey Hall of Fame in 2005.