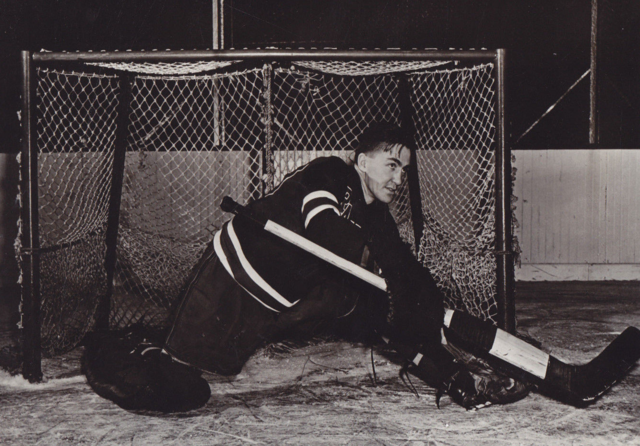 Henry played his minor Hockey in his hometown of Winnipeg, playing his first junior Hockey with the Winnipeg Lombards, and then starred for the Brandon Elks for 2 seasons from 1938 to 1940, helping the team win the 1939 Turnbull Cup championship as Manitoba Junior Hockey League champions.

Henry then joined the Regina Rangers for the 1940-41 season, leading the Rangers to first place in the South Saskatchewan Senior Hockey League with a record of 20-8-4. With a low total of only 95 goals allowed throughout the season, “Sugar” Jim Henry was named the league’s Most Valuable Player.

The Rangers would defeat the Yorkton Terriers, Port Arthur Bearcats and the Lethbridge Maple Leafs to reach the Allan Cup championship series in 1941. Henry played outstanding in the playoffs, but his team needed 5 games to defeat the Sydney Millionaires for the Allan Cup, and Henry posted a 3 to 0 shutout in the final game, as the Rangers claimed the 1941 Allan Cup championship.

The Regina Rangers were the farm team to the National Hockey League’s New York Rangers so many players went on to play in the NHL including Henry. New York GM, Frank Boucher needed a replacement for his old mainstay, Davie Kerr. Henry was brought East to Broadway in 1941 where he impressed Ranger fans and management, as he played all 48 games that season, winning a league high 29 games en route to leading the Rangers to first place.

But the outbreak of World War II immediately eclipsed Henry's big-league momentum as military service took precedence for the following 3 seasons. Henry enlisted in the Canadian military and later transferred to the navy. Based in Canada, he continued to play Hockey with the Ottawa Staff Clerks and the Ottawa Commandos, where he backstopped the Commandos to the 1943 Allan Cup championship.

Henry returned to the Rangers for 1945-46, but found the Rangers had secured the great Chuck Rayner while he was away. But coach Frank Boucher knew Henry was a good goalie too and kept Henry around, playing him in their AHL team affiliate the New Haven Ramblers. Boucher, years ahead of his time, formed the first two-goalie rotation in NHL history. Rayner and Henry, who quickly became best friends and later business partners, would alternate games when Henry was called up from the Ramblers.

The two-goalie system eventually proved cumbersome, and after three seasons with the Rangers, Boucher traded Henry to the Chicago Black Hawks for Emile Francis and Alex Kaleta just prior to the 1948-49 season.

Henry played valiantly for the weak Black Hawks, but the most he could do was lift them out of the cellar. When the great Frank Brimsek became available to the Black Hawks, they demoted Henry to the Kansas City Pla-Mors of the USHL. Henry won the 1950 Charles Gardiner Memorial Trophy Winner as Top Goaltender in the USHL.

Brimsek couldn't lead the Black Hawks out of the doldrums either, so desperate for a quality goaltender, Chicago made a big trade with the Detroit Red Wings in July, 1950 involving Henry and others going to Detroit in exchange for Harry Lumley and 4 other players. Henry wasn't going to beat out Terry Sawchuk in Detroit by any means, so he was sent to the USHL Omaha Knights and the AHL Indianapolis Capitols for the 1950-51 season.

The Boston Bruins bought Henry from Detroit just before the 1951-52 season, and he delivered some of the most exciting moments of his career, recording 8 shutouts and leading the Bruins to the Stanley Cup semi-finals in 1952 where they lost to the powerhouse Montreal Canadiens in 7 games. Rocket Richard scored the winning goal in game 7, and some believe it to be his greatest goal ever, but the handshake after the series produced one of sports greatest photos ever, as when Henry met Rocket Richard to shake his hand, he seemed to almost bow to Richard, who was bleeding through his bandage over his left eye, after being stitched up earlier in the game after a vicious hit that knocked him unconscious. Henry also appeared in the 1952 NHL All-Star game.

Henry would once again lead the Bruins into the playoffs in 1953, where they would meet the Canadiens again, but this time in the Stanley Cup finals, losing 4 games to 1. Henry did not play in all the games, as he had injured his ankle, which restricted his play.

By the mid-1950s, however, Henry had grown tired of life on the road with his family in tow, and had been recovering from a broken jaw suffered in the 1955 playoffs, so he retired from the NHL.

Henry played in 406 NHL games, and he recorded 27 shutouts, had a 2.87 career goals-against-average.

Henry played out his Hockey career with the Sault Ste. Marie Greyhound, Winnipeg Maroons, Warroad Lakers and the St. Paul Saints in 1960.

Jim Henry and the 1941 Regina Rangers Hockey Team were Installed in the Saskatchewan Sports Hall of Fame in 1967.

Sugar Jim Henry was inducted into the Manitoba Sports Hall of Fame & Museum in 2004.