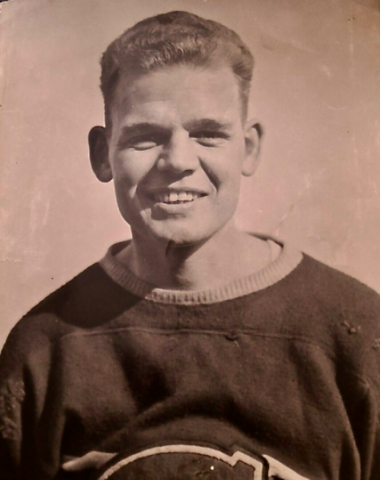 Getliffe started his Hockey career at his local high school, the London South Collegiate Institute, then in 1930, joined the London East Hockey Club, playing Senior A Hockey in the OHA.

Getliffe was lured to the East Coast, playing for the Charlottetown Abbeys, St. John's St. Peters and St. John Beavers during the 1934-35 season.

Getliffe was then signed by the NHL New York Rangers, who would lend him to the London Tecumsehs of the International Hockey League / IHL for the 1935-36 season. The Rangers sold him to the Boston Bruins half way through the season, and he would join the Boston Cubs for 29 games, scoring 16 goals (14 assists) before the Bruins called him up at seasons end, playing 1 regular season game and 2 playoff games.

Getliffe would be a Bruins regular in the 1936-37 season, becoming one of the top rookies that year, finishing 3rd in rookie voting. Getliffe scored his 1st NHL goal on November 24, 1936 vs Mike Karakas of the Chicago Black Hawks in a 1-1 tie.

Getliffe would score 37 goals (39 assists) while playing with the Boston Bruins from 1936 to 1939. He only scored 3 playoff goals (3 assists) for the Bruins, but 1 was very important, as it was the opening goal of game 7 vs the New York Rangers in the semi-final. Rangers tied the game, but the Bruins won in triple overtime 2-1, advancing to the Stanley Cup final vs the Toronto Maple Leafs, which they would also defeat in 5 games to claim the 1939 Stanley Cup championship.

Getliffe had been in the doghouse of Art Ross, who was coach, manager and vice president of the Bruins. Ross had Getliffe and another forward (Charlie Sands) demoted late in the Bruins 1938-39 season, sending them to the Hershey Bears for 4 games before bringing them back to the Bruins. Ross had said that their play of late has not been up to Bruin standards and "Too many goals have been scored against the Bruins while they were on the ice,"

Ross would trade Getliffe (and Charlie Sands) on October 10, 1939 to the Montreal Canadiens for Herb Cain.

Getliffe would get a new lease on his Hockey career in Montreal. He was a mainstay for the next six seasons. He was one of only a handful of players who remained with the team after Dick Irvin took over the reins and rebuilt the franchise.

A solid 2 way player, Getliffe was known as a hard-hitting forward who had a nose for the net, he scored 11 goals (12 assists) during his first season in Montreal.

On February 6, 1943, Getliffe was pencilled in to replace an injured Toe Blake alongside Elmer Lach and Maurice Richard. He made the best of his short stint on the “Punch Line”, scoring five goals and assisting on another in the Canadiens’ 8-3 drubbing of his former team, the Boston Bruins.

Getliffe would referee and work as a linemen for 2 NHL seasons after his retirement.

Ray Getliffe was inducted into the London Sports Hall of Fame in 2004.

NOTE
Getliffe was also responsible for coining one of Hockey’s legendary nicknames. "I was sitting on the bench during a practice with Murph Chamberlain and Phil Watson," Getliffe recalls. "(Elmer) Lach was on the ice with Richard and fed him a lovely pass. Richard got the puck and took off. I leaned over to Murph and said, 'Wow, Richard took off like a rocket!' Dink Carroll, he was a sportswriter with the Montreal Gazette, heard me and the next day in the paper wrote something about Richard skating like a rocket. It wasn't too long after that that Dink was using the nickname 'The Rocket' when he was writing about Maurice Richard."