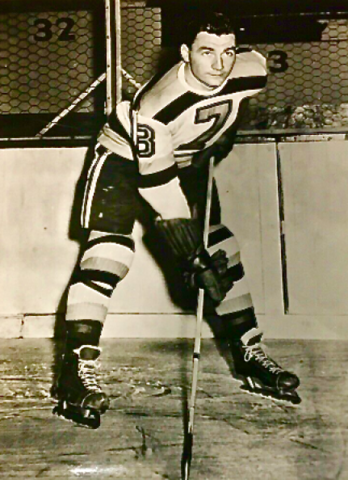 Reardon played his minor Hockey with the East Kildonan North Stars in Winnipeg.

Reardon then play his first year of junior Hockey with the St. Boniface Seals of the Manitoba Junior Hockey League in the 1935-36 season.

Reardon had a successful second season with the Seals, as he scored 32 points in 16 games before switching to the Brandon Wheat Kings for the 1937-38 season where he led the league in scoring with 29 goals and 16 assists for 45 points, while only playing in 16 games.

In 1938, he joined the Boston Bruins organization, splitting his first three seasons between the Hershey Bears of the AHL and the Bruins. He scored his 1st NHL goal on January 5, 1941 vs Sam LoPresti of the Chicago Black Hawks.

Boston engraved Reardon's name on the 1939 Stanley Cup, even though he only played four regular season games with the club, with no points.

Reardon split the 1940-41 season with the Hershey Bears (19 games) and the Bruins, including 11 NHL playoff games, where he scored 2 goals and 4 assists, helping the Bruins win the 1941 Stanley Cup championship.

Reporters knew him as Terrible Terry, and referred to him constantly as the "spark" that got the Bruins through the first round of the playoffs in 1941 against the Toronto Maple Leafs.

Having experienced only limited success in Boston, Reardon was loaned to the Montreal Canadiens for the 1941-42 season, where he was united with his younger brother, future Hall of Famer, Kenny Reardon. The union sparked the older Reardon's best season, netting 19 goals and 19 assist in 36 games.

Reardon, while playing for the Montreal Canadians, received five penalties in a game against the New York Rangers. The following day was his Birthday and he received a telegram of Congratulations from his Sister. It was addressed to Terrence Reardon, Penalty Box, the Forum, Montreal, Canada.

Like many NHL players, Reardon joined the Canadian military (in his case, the Royal Army) in 1942. He played his last 13 games for the Canadiens to start the 1942-43 NHL season, and like his former teammates, he played for various armed service-related teams (Montreal Army & Nanaimo Army) before being deployed to France.

His arrival in Europe didn’t go super awesomely, as he was wounded while taking part in D-Day in 1944. Reports at the time described the injury as a serious shoulder wound, and the majority made it clear that Terrible Terry’s playing days were most likely over.

Reardon’s triumphant return to the Boston Bruins lineup on Wednesday, October 24th marked the start of the 1945-1946 regular season, and also featured the return of Schmidt, Bauer, Dumart, and four other veterans. All the proceeds from the game went to a wounded veteran’s charity and the Bruins (like all the NHL teams whose players had been discharged) celebrated the return of their stars with a ceremony and a surge in game attendance. Boston made it to the 1946 Stanley Cup finals, Reardon scored 4 goals during the playoffs, including a overtime winner in game 4 of the finals, but the Bruins would lose to Montreal 4-1 in the series.

Reardon played for 2 full seasons with the Bruins, which were his final years in the NHL.

Reardon was named playing-coach of the American Hockey League / AHL Providence Reds on September 24, 1947, and stayed with the team until 1955.

Reardon did play one season in the Maritime Major Hockey League, when he was named playing-coach of Sydney Millionaires on September 3, 1953, but returned the Providence Reds to finish his Hockey playing career.

The very first issue ever of the Hockey News (October 1, 1947) profiled Reardon as he began his tenure with the Providence Reds, celebrating his tenacity both on and off the ice. He was the very picture of North American resilience and rebirth, and a perfect poster boy for the post-war era.

Reardon was also the general manager of the AHL Baltimore Clippers from 1962 until the team was disbanded in 1975. Reardon also was the 1971 AHL Coach of the Year with Baltimore.

Reardon was regarded as the symbol of Hockey in Baltimore, and was once known as Baltimore's "Mr. Hockey"

Terrance George (Terry) Reardon is a “Honoured Member” of the Manitoba Hockey Hall of Fame, inducted in 1985.