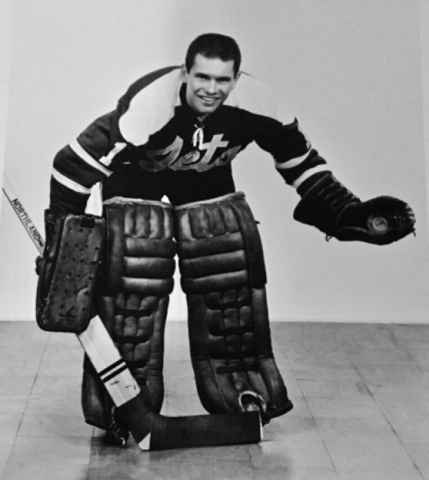 Daley played 2 seasons of junior Hockey with the Weyburn Red Wings in the Saskatchewan Junior Hockey League / SJHL and was named the SJHL’s most valuable player and the league’s top rookie for 1961-62. He also appeared in his first pro Hockey game, playing a single game in the EPHL for the Sudbury Wolves.

Daley signed with the Johnstown Jets for the Eastern Hockey League / EHL 1963-64 season. He appeared in 66 of the team’s 72 regular season games, putting up a 3.35 GAA. Daley was named the EHL Rookie of the Year. He helped the Jets to a first overall finish and the team reached the league playoff semi-finals. He also played in a single CPHL game with the Cincinnati Wings, and appeared in two regular season and two Calder Cup playoff games in the American Hockey League / AHL with the Pittsburgh Hornets.

Daley played another season in Johnstown, before starting 1966-67 with the Pittsburgh Hornets in the AHL and appeared in 16 games. However, he wasn’t with the club in the Calder Cup playoffs as the Hornets beat the Rochester Americans in the finals for the championship. It was the final year for the Hornets. Instead, Daley ended his 1966-67 season in the CPHL with the Memphis Wings.

Expansion brought Daley his first National Hockey League action. In 1967-68, he played a single game for the Pittsburgh Penguins in their inaugural season. He also appeared in 56 games in the AHL with the Baltimore Clippers.

The 1969-70 season was the last time Daley would play in the minors. He appeared in 34 regular season games for Baltimore and five more in the playoffs.

Daley would become the first ever member of the Buffalo Sabres via intra-league draft just hours before the 1970 NHL Expansion Draft, playing his first NHL Hockey without wearing a mask for the Sabres in 1970, and still holds the club record for saves in a regular-season game, making 64 stops during an 8-2 loss in Boston on Dec. 10, 1970. The Bruins' 72 shots on goal that night in Boston Garden remain the most ever against Buffalo and the 44-shot margin (72-28) is the widest gap in franchise history.

Daley also was in goal for what's still the worst loss in Sabres history, an 11-2 pounding against the Canadiens in the Montreal Forum on Nov. 7, 1970, just the 13th game in Sabres franchise history. It remains the club record for the most goals ever allowed and Daley gave up every single one - Final Shots 54-21.

Buffalo traded Daley to the Detroit Red Wings after that first season for Don Luce and Mike Robitaille. He appeared in 29 games for Detroit in 1971-72.

When the World Hockey Association / WHA formed for the 1972-73 season, Daley was picked in the WHA General Player Draft by the Winnipeg Jets on February 12, 1972.

Daley remained with the Jets for the entire life of the WHA, retiring after the 1978-79 season, a champion.

Over his seven seasons with Winnipeg, Joe played in 308 regular season games, posting 12 shutouts and a 3.37 goals against average.

He was a First Team All-Star in 1975-76 after leading the WHA in shutouts with 5, and playoffs wins with 10, helping Winnipeg win the 1976 AVCO (Cup) World Trophy as WHA champions

Joe Daley is a "Honoured Member" of the Manitoba Hockey Hall of Fame, inducted in 1995.

Joe Daley was inducted as an inaugural member into the World Hockey Association Hall of Fame in 2010.

Joe Daley was inducted into the Manitoba Sports Hall of Fame in 2018.