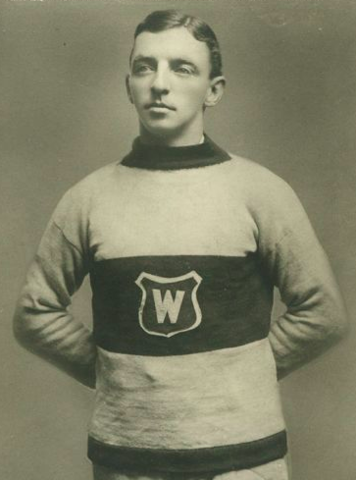 Smaill grew up in the Westmount area of Montreal with the likes of Lester & Frank Patrick, Sprague & Odie Cleghorn and Art Ross, playing various sports including baseball, but Hockey would become his passion.

Smaill went to Westmount Academy for his education, a Hockey hotbed in the Montreal area that produced many of the great players of the day, and they played their games at the famous Montreal Arena, also known as Westmount Arena.

Smaill joined the Montreal Wanderers of the Eastern Canada Amateur Hockey Association / ECAHA in December 1907, and would play for the Wanderers in 6 Stanley Cup challenge games - January 9, 1908 vs Ottawa Victorias, March 10 & 12, 1908 vs Winnipeg Maple Leafs, scoring in both games, March 14, 1908 vs Toronto Professionals and December 28 & 30, 1908 vs Edmonton Hockey Club / Edmonton Thistles, with Smaill being credited with scoring the Stanley Cup winning goal at 33:45 of the second half during the December 30th game.

Smaill was a key member of the Wanderers in winning the 1908 Arena Cup.

Smaill had also become a partner in Art Ross & Co. which opened in November, 1908, and would work in the store too.

Smaill and Art Ross then joined the Cobalt Silver Kings in February, 1909 for their 2 game total goals championship vs the Haileybury Comets in the Timiskaming Professional Hockey League on February 23 (7-1 victory) and February 26 (5-5 tie). The Silver Kings won the 1909 Temiskaming Hockey Cup Championship.

Smail and Art Ross returned to Montreal to play for the Wanderers, and were back in time to play for the ECHA championship vs the Ottawa Senators on March 3, 1909. Ottawa won the game 8-3.

Smaill would return to Cobalt in December, 1909 and play for the Silver Kings during the 1910 season. Smaill played in the very first National Hockey Association / NHA game on January 5, 1910 vs Le Canadiens (Montreal Canadiens) at the Jubilee Rink in Montreal, and would score a goal in the second half. The Canadiens defeated the Silver Kings, 7-6 in overtime.

The win was not in the record books for long. Days later, the CHA folded and two of its teams, the Montreal Shamrocks and the Ottawa Senators, were added to the NHA. The league wiped their slate clean, including 2 other games Cobalt played in, restarting the season two weeks later.

It was from the NHA league that the current National Hockey League / NHL has it's roots. The NHA governors had also decided to change the rules of Hockey. The NHA changed the timing of the game for the start of the 1911 season. Before, teams played in two 30-minutes halves; the governors introduced the idea of three 20-minute periods, with two 10 minute rest intervals, so fans would have more opportunities to stretch their legs and visit the concession stands at the NHA arenas.

Cobalt would only play 1 season in the NHA with a record of 4 wins, 8 losses in 1910. Smaill only played in 4 games for Cobalt before he signed in mid February to play with the Ottawa Senators, and his first game with the Senators was February 19, 1910.

Apparently there was some dissension on the Ottawa team about them playing Smaill, as captain Fred Lake & Hamby Shore had threatened to resign from the Senators if the club management continued to play Smaill instead of Ken Mallen, and at the same time, Cobalt was also protesting Smaill's jump to Ottawa, which got approved by the NHA on February 28. Smaill played in 10 games during the NHA season (6 with Ottawa), scoring 6 goals.

At a NHA league meeting on November 26, 1910, there was talk about Smaill's contract with Ottawa, and the Senators presenting there side with their rights to Smaill, that he would play for them, or they would sell him to another team. Smaill on the other hand, argued his contact was for the previous season with Ottawa, and he was not the property of the club.

Smaill eventually went back to the Wanderers, and was part of another protest on the opening game of the season January 5, 1911
with the Wanderers playing the Renfrew Creamery Kings. The league rules at this time permitted changing players during the first two periods. Just before the close of the 2nd period, Wanderers replaced Jimmy Gardner, who still had 30 seconds to serve of a penalty, by Smaill. Renfrew claimed Smaill was not eligible to go on. At a league executive meeting on January 24, the Renfrew protest was upheld, and the game ordered replayed in Ottawa on February 15. Smaill would play in 13 games for the Wanderers, scoring 7 goals during the season.

Smaill would then be lured West to the new league Lester & Frank Patrick had started, called the Pacific Coast Hockey Association / PCHA. There would be 3 teams in the new league, the Vancouver Hockey Club (Millionaires), New Westminster Royals and Victoria Aristocrats. Smaill would play with Victoria, and score 9 goals in 16 games with the Aristocrats in the first season of the league in the 1912 season.

The 1912-13 season had the Aristocrats win the PCHA championship with a record of 10 wins, 5 losses, and Smaill scoring 7 goals in 10 games played. Victoria formally asked to play for the Stanley Cup, but was turned down due to the PCHA season ending several weeks later than the eastern leagues' season finished, so they challenged the defending Stanley Cup holders, the Quebec Bulldogs to a 3 game exhibition series to be played in Victoria in late March. The Aristocrats won the series 2 games to 1. March 24 game one 7 -5 win, March 27 game two 6-3 loss and March 29 game three 6-1 victory. Smaill played in games 2 and 3, scoring 1 goal in game 2.

The 1913-14 season had the Aristocrats repeat as PCHA champions, and Smaill would again score 7 goals in 15 games played, including a overtime goal on February 17 that clinched the PCHA championship for the Aristocrats. Victoria would then travel to Toronto to play a best of 5 game series for the Stanley Cup with the Toronto Blueshirts, starting the "World's Series" era where the NHA champion played off against a PCHA or Western league champion annually for the Stanley Cup. The Blueshirts would win the series in 3 straight games, with Smaill only playing in game 2 and scoring a goal.

Smaill would return to Montreal and play his final season of pro Hockey with the Wanderers during the 1915-16 season, scoring 6 goals with 1 assist in 21 games played.

Smaill would spend one year as the President of Hockey Northwestern Ontario in 1918-19.