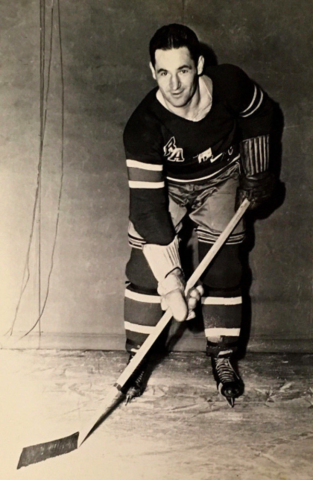 Sands played his senior Hockey with the Port Arthur Ports from 1929 to 1932, and then turned pro with the IHL Syracuse Stars to start the 1932-33 season.

Sands played his first NHL Hockey in the spring of 1933 with the Toronto Maple Leafs, and also played in 9 playoff games for the Maple Leafs, scoring 2 goals, 2 assists in 9 games, helping them reach the 1933 Stanley Cup finals. Sands then played for the Maple Leafs during the 1933-34 season, and was selected to the 1934 NHL All-Star Game (Ace Bailey Benefit Game).

Sands was then traded to the Montréal Canadiens with Ray Getliffe for Herb Cain, October 10, 1939, and played in Montreal for 4 seasons from 1939 to 1943.

Sands played his final NHL Hockey with the New York Rangers during the 1943-44 season, and wrapped up his professional Hockey career in the Pacific Coast Hockey League with the Pasadena Panthers as a player/coach (1944-45), Los Angeles Monarchs (1945-46), Fresno Falcons (1946).

While in California, Sands was part of the Hollywood movie "Gay Blades" doing background scenes as a Hockey player.