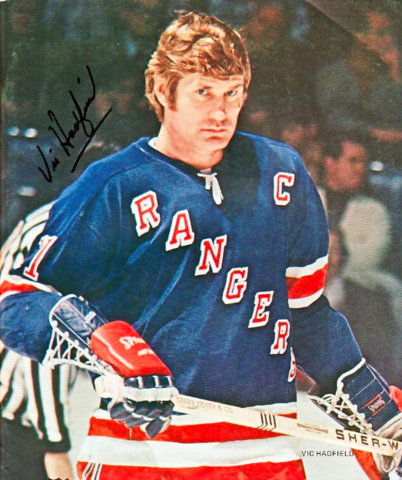 Hadfield played all of his minor Hockey in Oakville before moving to the Dixie Beehives junior Hockey team for one season in 1957. He was signed by the Chicago Black Hawks and assigned to their junior league affiliate, the St. Catharines Teepees of the Ontario Hockey League / OHA.

Hadfield was a force for the Teepees, he averaged a point a game in the regular season and playoffs, and a average of five penalty minutes a game in the playoffs too, as they won the 1960 J. Ross Robertson Cup (OHA) and the George Richardson Memorial Trophy as eastern champions. Hadfield then scored 6 goals, 8 assists in the Memorial Cup playoffs, helping the team win the 1960 Memorial Cup championship.

Hadfield then turned pro, playing his first year with the Buffalo Bisons of the American Hockey League / AHL, and before he could play for the Black Hawks, Hadfield was claimed by the New York Rangers from Chicago in NHL Intra-League Draft, June 13, 1961.

Except for a brief stint with the Baltimore Clippers during the 1962-1963 season, Hadfield played for the Rangers from 1961 until 1974. In 1963-64, Hadfield posted a league-leading 151 penalty minutes in 69 games, and he had secured a place in the Rangers' lineup as an enforcer.

Over time Hadfield concentrated more on scoring than on fighting, especially with feared enforcer Reggie Fleming on the Rangers team. He joined teammates Jean Ratelle and Rod Gilbert to form the famous Goal-A-Game line / GAG Line, and started to increase his point totals during the 1967-68 season. Hadfield credited a new curved stick recommended by friend Bobby Hull.

That was the first year that his point total came close to equaling his penalty minutes. He consistently scored twenty or more goals a season for the rest of his career. However, he still found time to entertain his teammates by "allegedly" nailing a defenseman's shoes to the floor of the dressing room. He also managed to steal Bernie Parent's mask during a game against the Maple Leafs and toss it into the crowd at Madison Square Garden.

Hadfield's best season was 1971–72. Named the team's captain after the trade of longtime captain Bob Nevin, a position he held until being traded to Pittsburgh in 1974. Hadfield was the first member of the New York Rangers to score 50 goals in a single season. With 262 goals as a Ranger, he is the highest-scoring left-wing in team history and the only left-winger in team history to score 100 points in one season.

Although he was a perennial fan favourite in New York, Hadfield drew a lot of criticism during the 1972 Summit Series while representing Team Canada. Having been used sparingly (2 games) during the first half of the series, Hadfield traveled with the team to Moscow only to learn that he would probably not be dressing for any of the remaining games, in spite of having just come off a fifty goal season with the Rangers. Hadfield was understandably upset and promptly packed his bags and caught the first flight home. Hadfield felt that his time was better spent getting ready for the Rangers camp and making sure he earned his high salary, those who weren't close to the situation viewed his decision as a selfish act based on a bruised ego.

Hadfield remained with the Rangers through the end of the 1973-74 season, when financial pressures led the team to trade him to the Pittsburgh Penguins. Although surprised by the trade and coping with a series of injuries, Hadfield went to Pittsburgh, posting two consecutive 30-goal seasons before he suffered a eventual career-ending knee injury in game vs. the Toronto Maple Leafs, March 29, 1976.