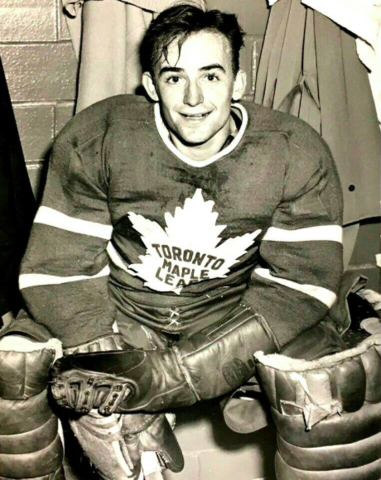 Mayer played all his early Hockey in the Ottawa area, and at age 15 played senior Hockey for the Hull Volants in the Ottawa City Hockey League / OCHL from 1944 to 1946. Mayer then joined the senior Lake Placid Roamers for the 1946-47 season.

Mayer began his Professional Hockey career in 1949 with the Pittsburgh Hornets, winning 20 games. While Playing in Pittsburgh during his first pro season, Mayer was called up to the NHL to replace injured Maple Leafs Turk Broda, December 1, 1949. Mayer allowed 2 goals, as the Maple Leafs lost to the Red Wings 2-1.

During the 1951 AHL playoffs, Mayer helped the Hornets reach the Calder Cup finals, losing in game 7 of the championship series, and he was also voted the the 1951 AHL First All-Star Team.

Mayer then had the best season of his career in 1951-52, posting a career high 46 wins during the regular season, and then backstopping the Hornets to the 1952 Calder Cup championship.

Mayer then led the Hornets to the finals of the 1953 Calder Cup, losing again in game 7. He was also voted to the 1953 AHL Second All-Star Team.

The 1955-56 season would be the last for Mayer in a Hornets jersey. He posted 40 victories during the regular season, and the Maple Leafs called him up for 6 games, which hw only won 1. He was later traded by Toronto, who owned his rights, to the Red Wings with Jack Price, Willie Marshall, Bob Hassard, Bob Solinger and Ray Gariepy for cash, July 7, 1956. He was also voted to the 1956 AHL Second All-Star Team.

Mayer played for the Red Wings AHL team, the Hershey Bears for the nest 3 seasons, playing on teams that went on to win the Calder Cup in 1958 and 1959, although he did not see any postseason action either year.

Mayer was traded to the AHL Cleveland Barons by Hershey for Gord Hollingworth and Claude Dufour, June, 1959, and played 2 seasons in Cleveland, and the two after that with the Providence Reds before retiring in 1963, trailing only Johnny Bower in all-time AHL wins and shutouts (41).

Mayer was nicknamed “The Needle” because of his 5-foot-6, 135-pound frame, making him just about the smallest player in the league at the time. But he made up for his diminutive stature with quickness and agility, and would be credited with winning 346 games over 14 seasons with the Pittsburgh Hornets, Hershey Bears, Cleveland Barons and Providence Reds from 1949-63. (His victory total is actually slightly higher, but statistics from the 1958-59 season remain incomplete.)

Gil Mayer was inducted into the American Hockey League Hall of Fame in 2007.