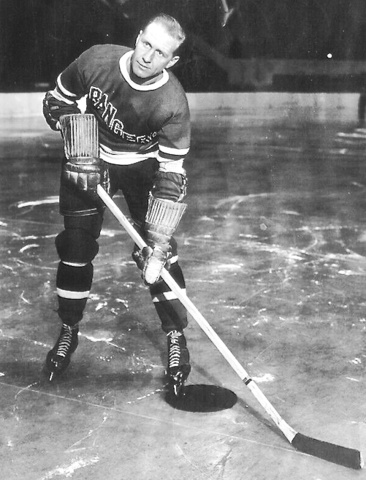 MacDonald left Ottawa to go work in the mines in Northeastern Ontario. There was also some very competitive Hockey teams there too, playing in the Gold Belt Hockey League / GBHL. MacDonald first joined the Kirkland Lake Blue Devils for the 1934-35 season, then the Noranda Copper Kings the next season. While playing for the Copper Kings, he was noticed by a scout working for the New York Rangers.

MacDonald would turn pro for the 1936-37 season, playing for the Rangers farm team the New York Rovers, who played in the Eastern Amateur Hockey League / EAHL (EHL), and also played in Madison Square Gardens. In his first season as a professional, MacDonald would score a career high 21 goals, along with 22 assists during the regular season, and 3 goals, 3 assists in the playoffs, helping the Rovers win the 1937 Hershey Cup.

MacDonald would then play 2 seasons with the Philadelphia Ramblers in the International-American Hockey League / IAHL (AHL), helping them reach the league finals in 1939.

The New York Rangers had now signed MacDonald, and he made his NHL debut in November 5, 1939 vs the Detroit Red Wings at the Olympia in Detroit. He would score his 1st NHL goal on December 2nd vs Earl Robertson of the New York Americans in a 1-1 tie at Madison Square Gardens.

MacDonald had a fantastic first year in the NHL, scoring 15 goals, 13 assists, and beat out Toronto's Wally Stanowski and Chicago's Doug Bentley as the winner of the 1940 Calder Trophy (Calder Memorial Trophy) as the NHL's Rookie of the Year. He also had 2 assists in the playoffs, as the Rangers won the 1940 Stanley Cup championship.

MacDonald was back playing for the Rangers in the 1940-41 season, but his scoring slipped to just 5 goals, 6 assists during the season, and 1 goal i the playoffs, as the Rangers lost in the first round of the playoffs.

MacDonald would then split the 1941-42 season between the Hershey Bears and Buffalo Bisons of the American Hockey League / AHL.

With WWII now happening, MacDonald returned to Canada to serve in the Army, also playing for the Montreal Army Hockey team in the Montreal City Hockey League / MCHL for two seasons.

MacDonald returned to the Rangers after serving in the war effort, playing with them for 2 seasons from 1943 to 1945. He played one more season with the Hull Volants of the Quebec Senior Hockey League / QSHL in 1945-46 before retiring.

MacDonald would turn to coaching in the amateur ranks at West Point, Arvida, Baltimore, and Quebec.

James Allen Kilby MacDonald was inducted into the Ottawa Sport Hall of Fame in 1992.