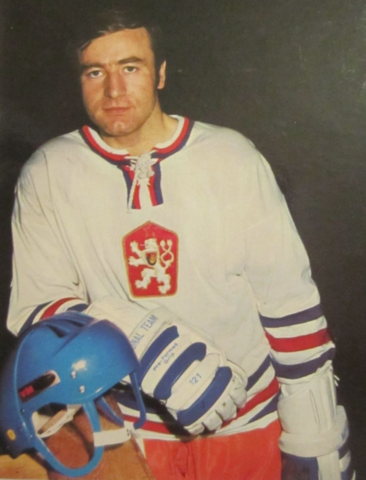 Klapáč started playing ice Hockey in Slavia Karlovy Vary, where he moved with his parents at the age of four. They lived directly against the stadium near the Marketplace, and so small Jan could see the then stars of the Karlovy Vary Hockey: Freiberga, Šinágla, Feureisela, Kollera and others.

During the summer training camps, Klapáč, as the youngest player in the team, had to shoot three hundred to five hundred pucks a day. Several times he was the best scorer of the team.

From 1960, Klapáč joined the HC Dukla Jihlava , where he joined the military service . He stayed here for 15 years, and in 1975 he finished his career.

Overall, he played 524 matches in the Czechoslovak Ice Hockey League, and in fifteen seasons scored 354 goals. With Dukla Jihlava, he became the champion of the country seven times.

Klapáč had his best success playing with the brothers Jaroslav and Jiří Holík, where the trio dominated play, helping the Czechoslovakia National team win the 1972 World Ice Hockey Championship.

Klapáč played in 2 Olympic games, winning the Bronze medal in 1964 and the Silver medal in 1968.

Jan Klapáč was inducted in the Hall of Fame of Czech Hockey in 2010.